But this universal and primary opinion of all men is

But this universal and primary opinion of all men is soon destroyed by the slightest philosophy, which teaches us, that nothing can ever be present to the mind but an image or perception, and that the senses are only the inlets, through which these images are conveyed, without being able to produce any immediate intercourse between the mind and the object. The table, which we see, seems to diminish, as we remove far- ther from it: but the real table, which exists independent of us, suffers no alteration: it was, therefore, nothing but its image, which was present to the mind. These are the obvious dictates of reason; and no man, who reflects, ever doubted, that the existences, which we consider, when we say, this house and that tree, are nothing but perceptions in the mind, and fleeting copies or representations of other existences, which remain uniform and independent. 119. So far, then, are we necessitated by reasoning to contradict or depart from the primary instincts of nature, and to embrace a new sys- tem with regard to the evidence of our senses. But here philosophy finds herself extremely embarrassed, when she would justify this new system, and obviate the cavils and objections of the sceptics. She can no longer plead the infallible and irresistible instinct of nature: for that led us to a quite different system, which is acknowledged fallible and even errone- ous. And to justify this pretended philosophical system, by a chain of clear and convincing argument, or even any appearance of argument, exceeds the power of all human capacity. By what argument can it be proved, that the perceptions of the mind must be caused by external objects, entirely different from them, though

106/David Hume resembling them (if that be possible) and could not arise either from the energy of the mind itself, or from the suggestion of some invisible and unknown spirit, or from some other cause still more unknown to us? It is acknowledged, that, in fact, many of these perceptions arise not from anything external, as in dreams, madness, and other diseases. And noth- ing can be more inexplicable than the manner, in which body should so operate upon mind as ever to convey an image of itself to a substance, supposed of so different, and even contrary a nature. It is a question of fact, whether the perceptions of the senses be produced by external objects, resembling them: how shall this question be determined? By experience surely; as all other questions of a like nature. But here experience is, and must be entirely silent. The mind has never anything present to it but the perceptions, and cannot possibly reach any experience of their connexion with objects. The supposition of such a connexion is, therefore, without any foundation in reasoning. 120. To have recourse to the veracity of the Supreme Being, in order to prove the veracity of our senses, is surely making a very unex- pected circuit. If his veracity were at all concerned in this matter, our senses would be entirely infallible; because it is not possible that he can ever deceive. Not to mention, that, if the external world be once called in 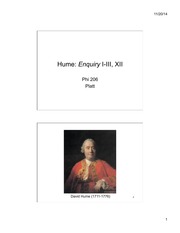 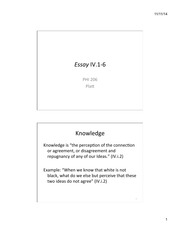