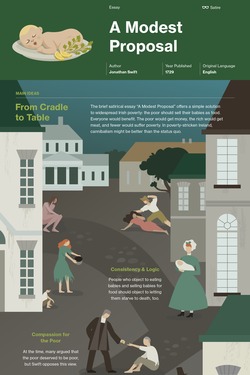 Jonathan Swift wrote this biting satirical essay to draw attention to the plight of Irish Catholics, who were so poor at the time that they were starving. However, Swift was also writing to rouse wealthier Protestant Irish readers to action, because he believed the Irish were too passive in regard to their own suffering. Since Swift had made serious proposals to the Irish legislature only to see them ignored by the Protestant Ascendancy, his satire is also a response to his own position.

Jonathan Swift writes in the first person, but he takes on the satirical persona of someone who advocates cannibalism.

Many period pamphlets started with the phrase "A Modest Proposal." Jonathan Swift's title begins his satire. Since his proposal is not modest, this is a case of verbal irony. The second half of the title is literally true, but misleading: "For Preventing the Children of Poor People in Ireland, from Being a Burden on Their Parents or Country, and for Making Them Beneficial to the Publick." Swift's proposal would make the poor of Ireland "beneficial to the public," but it would do so via institutionalized cannibalism, thus killing many of them.

This study guide and infographic for Jonathan Swift's A Modest Proposal offer summary and analysis on themes, symbols, and other literary devices found in the text. Explore Course Hero's library of literature materials, including documents and Q&A pairs.

Have study documents to share about A Modest Proposal? Upload them to earn free Course Hero access!