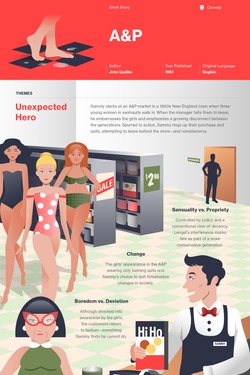 "A&P" is told in the first person by Sammy, a 19-year-old cashier with a limited teenaged point of view. Although his point of view is restricted, he shows growth or change over the course of the story.

The narrator of "A&P" switches between present and past tense.

A&P is the name of the grocery store that serves as the setting of the story. A&P was the largest retail chain in the United States throughout the 1950s and 1960s.

This study guide and infographic for John Updike's A&P offer summary and analysis on themes, symbols, and other literary devices found in the text. Explore Course Hero's library of literature materials, including documents and Q&A pairs.