A Song of Ice and Fire (Series) | Study Guide 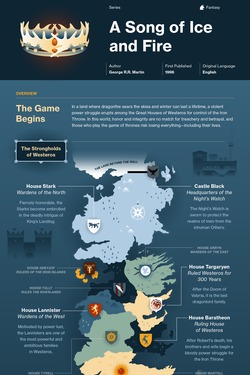 A Song of Ice and Fire is an epic fantasy that weaves together three key story lines: the battle among the ruling families of Westeros for control of the Iron Throne; the quest by the exiled Westeros princess, Daenerys Targaryen, to regain the throne for herself; and the terrifying threat of the Others, an inhuman race not seen for thousands of years. The Others are now massing behind the great defensive ice Wall to the north and are hungry to break through with an army of the undead to destroy "every creature with hot blood in its veins."

Originally envisioned as a trilogy, A Song of Ice and Fire eventually grew in scope and complexity. Consequently, author George R.R. Martin planned a seven-volume series. Although the first book, published in 1996, was considered a "solid" entry in the fantasy genre field, Martin didn't become a best-selling author until 2005, with the publication of the fourth novel in the series. As the books exploded in popularity, they inspired an equally popular TV series that premiered in 2011, Game of Thrones, that eventually outpaced the completed novels' story lines. Despite—or perhaps because of—this unusual dual-development arc, an international fan base of millions has ensured that this work by "the American Tolkien" will become a classic of epic fantasy literature.

A Song of Ice and Fire is presented through third-person limited narration, but the point-of-view (POV) character changes with each chapter. Every novel in the series also contains a somewhat different cast of POV characters, providing readers with complex—and sometimes conflicting—insights into the events and individuals.

A Song of Ice and Fire is written in the past tense.

The meaning of the title A Song of Ice and Fire is open to interpretation, and fans have developed dozens of theories. A prophecy in the book, however, shows the former crown prince Rhaegar Targaryen describing an unidentified infant as follows: "He is the prince that was promised ... his is the song of ice and fire." Some have interpreted this to mean that the promised "prince" who will resolve the conflicts of Westeros, and save it from the coming Winter, is a descendant of both the Stark family from the icy regions of Winterfell and the Targaryen Dragonlords.

This study guide and infographic for George R.R. Martin's A Song of Ice and Fire (Series) offer summary and analysis on themes, symbols, and other literary devices found in the text. Explore Course Hero's library of literature materials, including documents and Q&A pairs.

Have study documents to share about A Song of Ice and Fire (Series)? Upload them to earn free Course Hero access!