A Theory of Justice | Study Guide 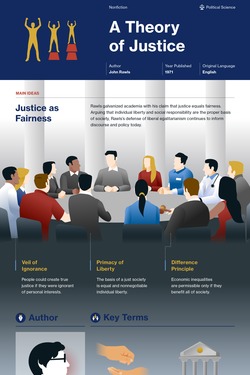 Liberal political philosopher John Rawls wrote A Theory of Justice hoping to displace utilitarianism as the dominant ethical philosophy in academia and policy. He argues his theory of justice as fairness is a more stable conception of justice than utilitarianism and is, therefore, the preferable alternative. While utilitarian theories of justice seek to maximize the good in society, Rawls's theory is based on a hypothetical situation in which two principles of justice to govern a society are chosen by individuals who have been blinded to their personal desires and circumstances by a "veil of ignorance." The principles mandate individual equal rights and that economic inequalities must advantage society's most disadvantaged. Rawls's thought has entered the canon of modern political philosophy, and his ideas continue to spark academic debate and shape the decisions of policy-makers.

In A Theory of Justice, Rawls presents a coherent and in-depth argument for his social contract-style theory of "justice as fairness." Social contract theories of justice are based on the idea that the obligations that bind individuals together within a society originate in and are justified by an agreement, or contract.

This study guide and infographic for John Rawls's A Theory of Justice offer summary and analysis on themes, symbols, and other literary devices found in the text. Explore Course Hero's library of literature materials, including documents and Q&A pairs.

Have study documents to share about A Theory of Justice? Upload them to earn free Course Hero access!