Course Hero. (2016, October 13). All Quiet on the Western Front Study Guide. In Course Hero. Retrieved May 22, 2022, from https://www.coursehero.com/lit/All-Quiet-on-the-Western-Front/

Professor Bradley Greenburg of Northeastern Illinois University provides an in-depth summary and analysis of Chapter 1 of Erich Maria Remarque's novel All Quiet on the Western Front.

All Quiet on the Western Front | Chapter 1 | Summary

The novel opens as the narrator describes his current life on the front lines of World War I. His platoon is resting five miles behind the front. They have eaten well for the first time in a long while and have also received a large ration of cigars, cigarettes, and chewing tobacco. The narrator notes that this windfall of food and tobacco products is a fluke, owing to the fact that half of the men in his platoon were killed in combat the previous day—the extra rations were meant for the now-dead soldiers. This is an especially carefree day for the men, because most have received letters from home and are resting in a meadow, though they can still hear bombs from the front lines in the distance. Yet Paul Bäumer and his friends are acutely aware that instead of enjoying the extra rations, they could very well have been the ones who died.

The narrator introduces his various comrades: Albert Kropp, "the clearest thinker among us," Fredrich Müller, who still studies for school exams, Tjaden, a skinny locksmith who eats more than anyone else, and Stanislaus "Kat" Katczinsky, the leader of their group who is much older than the rest of them. The narrator introduces himself as Paul Bäumer, and notes that he and most of his comrades are 19 years old. Paul notes how the men's behavior here is very different than their behavior at home. Used to living together in close quarters, they go to the bathroom shamelessly in front of each other, and they don't hesitate to use vulgar language that would shock their families and friends.

Kropp has received a letter from their old school teacher, Kantorek. He had encouraged Paul and his friends to volunteer for the war for the sake of patriotic duty. Paul notes that not to have volunteered would have meant he and his friends would have been ostracized by their families and community, and that "there were thousands of Kantoreks, all of whom were convinced that they were acting for the best—in a way that cost them nothing." He feels bitter that trusted adults like Kantorek, who were supposed to mentor and guide them, failed them by idealizing war. After seeing so many of his friends die in combat, Paul has lost respect for men like Kantorek. He feels that they know nothing of what the war is actually like—because this war is different and the world is changing. In the letter, Kantorek calls them "the Iron Youth," which Paul finds inaccurate because he and his comrades no longer feel young after what they have experienced on the front lines.

Paul and his friends go to visit a wounded comrade, Franz Kemmerich, in the infirmary. Kemmerich has just had his leg amputated but is too dazed to understand that he has lost a limb. Someone stole his watch while he was unconscious. Paul feels that the theft doesn't matter because he believes that Kemmerich will likely die in the infirmary anyway. Müller eyes Kemmerich's boots, realizing that they will be useful for one of them to keep.

Rather than present the novel as the story of a glorious war hero, Remarque is quick to paint a picture of how the brutal realities of modern war affect soldiers. Many previous novels about war tend to emphasize the nobility and honor of being a soldier, leaving out the bloodier, more tragic aspects of warfare and the psychological damage that results.

It's significant that Remarque does not open the novel in the midst of battle, as most war stories do. Instead, the novel begins as the soldiers are experiencing a brief respite from battle in a pleasant meadow as the "muffled rumble" of the front is drowned out by the sound of bumblebees. Rather than discussing combat, the soldiers are enjoying a surprise windfall of extra food and tobacco. However, Remarque quickly establishes the inevitability of death and destruction that lies behind even such minor pleasures in wartime. The soldiers have only received these items due to the loss of half their platoon in combat. The food and tobacco was originally earmarked for their now-dead colleagues. But the men don't dwell on that. Instead, they focus on the pleasure of eating and smoking. Throughout the novel, the men seek simple bodily pleasures as an escape from the tremendous damage the war exerts on the human body.

Similarly, when the soldiers visit the dying Franz Kemmerich, they are mostly interested in what he will leave behind when he dies that they can use, such as his boots. This doesn't mean they feel no compassion for their comrade, but it indicates that being pragmatic about survival is their main focus. This focus on survival is also a coping mechanism in the face of death. The soldiers refrain from discussing what they felt when they visited Kemmerich, though Albert Kropp becomes visibly upset. Paul Bäumer distracts Kropp by asking about the letter he received, because Kropp's emotions may have an impact on the other soldiers, who can't risk losing their self-control.

In many ways, the style and structure of All Quiet on the Western Front reflects how World War I differed from previous wars with its use of trench warfare, rapid-fire weapons, and nerve gases. Paul's tone is established from the beginning of the novel as desensitized and jaded when conveying the horrors he and his platoon have endured. His attitude also seems to be a psychological by-product of the need to survive. Paul and his comrades are volunteers who have signed up to fight out of a sense of duty and patriotism for their country. Paul's descriptions of his friends in their earlier lives as students is telling, because what has served them well as civilians will not necessarily serve them as soldiers—an example being the way Fredrich Müller continues to study his textbooks as if the war has not disrupted his life.

Paul saves his anger for Kantorek, their former teacher, in an example of situational irony. Situational irony occurs when the outcome of an event differs significantly from how it was expected to turn out. Paul formerly saw authority figures such as Kantorek as people with wisdom to be respected and whose advice they should follow. But after witnessing the death of his friends in battle, Paul sees that Kantorek and his generation know nothing about the realities of this war, and are able to hide behind books and lectures while instructing younger people on the concept of honor and duty. Paul recognizes that due to their war experience, his generation knows more about the meaning of patriotism and sacrifice than Kantorek's older, seemingly wiser generation ever could. 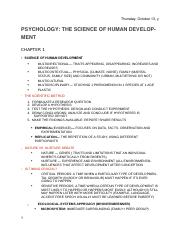