Course Hero. (2016, October 13). All Quiet on the Western Front Study Guide. In Course Hero. Retrieved May 25, 2022, from https://www.coursehero.com/lit/All-Quiet-on-the-Western-Front/

All Quiet on the Western Front | 10 Things You Didn't Know

Erich Maria Remarque's wartime novel All Quiet on the Western Front remains one of the most poignant, chilling, and moving accounts of the plight of a soldier in the modern age. Published in 1929—a decade after the armistice ending World War I—Remarque tells the story of a young German soldier named Paul who endures hardship after hardship fighting in the trenches, losing friends to bullets and bombs and fearing for his life every second of every day.

Based on Remarque's own experiences in World War I (during which he served alongside Adolf Hitler), All Quiet on the Western Front was praised upon publication by veterans who saw it as an accurate depiction of the war that did not aggrandize the viciousness and suffering of combat. In its first 18 months in print, the novel sold 2.5 million copies and appeared in 22 different languages. As a truly global conflict, World War I—then called the Great War—had such an impact on the world that the arrival of a truthful account describing the lingering hardships of its brutality was appreciated almost universally.

1. All Quiet on the Western Front was one of the first books burned by the Nazis.

In 1933 the Nazis rose to power in Germany and began publicly burning books they felt were a threat to the power of the state. All Quiet on the Western Front was among these, as it too vividly described the realities of war, questioned the notion of patriotism as a motivation to enlist, and underlined the futility of the German cause in World War I.

2. The Nazis revoked Remarque's German citizenship because of All Quiet on the Western Front.

Beyond burning his books, the Nazi regime revoked Remarque's German citizenship, denouncing the novel as Marxist propaganda and a work of treason. As a result Remarque was forced to move to the United States. Before living and working in Hollywood, he became acquainted with the famous German-born actress Marlene Dietrich and had a complicated affair with her that was apparently known of and tolerated by her husband. He later had a brief affair with another famous actress, Greta Garbo.

3. Nazi soldiers raided a premiere of the film version of All Quiet on the Western Front.

On December 5, 1930—three years before the Nazis came to power in Germany—the Nazi propagandist Joseph Goebbels led armed forces into the premiere of All Quiet on the Western Front, using smoke bombs and beating members of the crowd. The idea of a film showing the brutality of modern combat was thought to be inherently "un-German." The Nazis subsequently banned the film when they came to power.

4. Remarque used imagery from a war bonds poster for his cover.

The cover of the first English-language edition of All Quiet on the Western Front was inspired by the design of World War I propaganda in Germany. The use of the propaganda-style artwork is in sharp contrast to the book's anti-war sentiment. 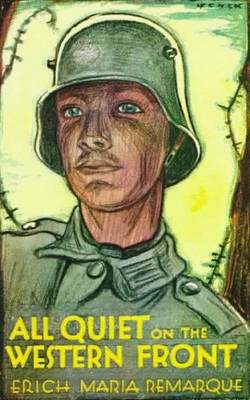 English-language cover of All Quiet on the Western Front.

Wounded in 1917, Remarque spent time recovering at an overcrowded hospital in Duisburg, Germany. His descriptions of the medical horrors of wartime, including the dreaded "dying room," were all based on what he saw during his hospitalization.

6. Paul represents one of many who died on Armistice Day.

Perhaps the greatest tragedy in All Quiet on the Western Front is that the protagonist, Paul, is killed shortly before the war is officially declared over. On Armistice Day, November 11, 1918, there were some 10,000 fatalities, including more than 3,000 Americans, as General John J. Pershing commanded a final charge at 10:30 a.m., a mere half-hour before the Armistice would take full effect.

The musician's 1982 album Jump Up! features a song of the same name as the book, lamenting the war. The lyrics state, "It's gone all quiet on the Western Front, male Angels sigh/Ghosts float in a flooded trench as Germany dies."

8. Remarque's sister was beheaded by the Nazis because of her relation to the author.

Elfriede Scholz, Remarque's sister, held the same anti-Nazi views of her brother. She was arrested and sentenced to death by beheading, and the verdict stated explicitly, "Your brother is beyond our reach, but you will not escape us!"

9. All Quiet on the Western Front received criticism for its depiction of doctors, nurses, and nuns.

The German medical professional Karl Kroner criticized Remarque's portrayal of the German doctors, nurses, and nuns as uncaring and mechanical in their treatment of wounded soldiers. Kroner was worried Remarque's depiction would promote this stereotype abroad. One particular concern Kroner expressed was that Remarque did not explain how doctors would rush onto battlefields to tend to the injured, bringing them back to medical tents during combat. In reality, Kroner's concern was inadvertent foreshadowing of the Nazi-funded human experimentation that would be conducted during World War II.

10. All Quiet on the Western Front was part of an important literary movement.

The literary style known as "Neue Sachlichkeit," translating to "New Objectivity," arose in post–World War I literature. This form of narrative is notable for rejecting artistic flourishes in favor of a more realistic, down-to-earth approach. The extremely realistic narration in All Quiet on the Western Front is a prime example of this type of literature.