All the King's Men | Study Guide 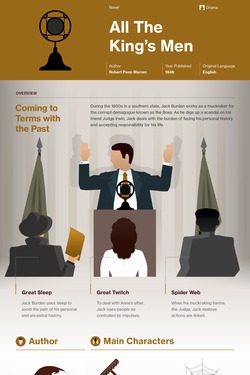 All the King's Men is narrated in the first person by Jack Burden, who at times refers to himself in the second or third person. Jack narrates his own story as well as the stories of Willie Stark, Cass Mastern, and Judge Irwin, among others. Because all characters and events are filtered through Jack's perspective, his emotional closeness to these stories brings his reliability into question. Finally, because Jack quotes from Cass Mastern's journal, Cass functions as a first-person narrator in these segments.

All the King's Men is told in the past tense except for the end of Chapter 10, which is told in the present tense. The narrative voice shifts to mirror the large scale of the plot and theme.

The title comes from the nursery rhyme "Humpty Dumpty." Like Humpty Dumpty, State Governor Willie Stark rises to political power or "s[its] on a wall." After spending several years as a dominant governor of a southern state, Willie has "a great fall" from power. All of Willie's political associates cannot repair the harm done to Willie: "all the king's men couldn't put Humpty together again." Critics differ in their opinions on the meaning of the word king in the title. One interpretation is that the king is Willie. However, some scholars claim that the king refers to someone or some force more powerful than Willie, such as God.

This study guide and infographic for Robert Penn Warren's All the King's Men offer summary and analysis on themes, symbols, and other literary devices found in the text. Explore Course Hero's library of literature materials, including documents and Q&A pairs.

The Ring Willie's Hospital Roar of the Crowd

Have study documents to share about All the King's Men? Upload them to earn free Course Hero access!