Literature Study GuidesAn Essay On The Principle Of Population

An Essay on the Principle of Population | Study Guide

Course Hero. (2018, April 27). An Essay on the Principle of Population Study Guide. In Course Hero. Retrieved July 6, 2022, from https://www.coursehero.com/lit/An-Essay-on-the-Principle-of-Population/ 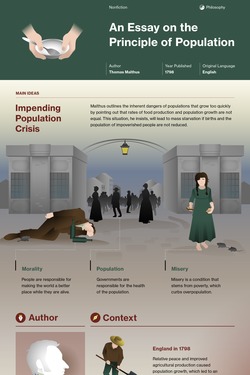 An Essay on the Principle of Population brings together ideas from philosophy, economics, and the science of statistics to describe what Malthus sees as a fundamental and unsolvable problem within human society. The rate of food production, Malthus argues, cannot, in the long run, keep pace with population growth. In any society where food is plentiful, the population will grow until the poor are barely able to feed themselves. Widely and often viciously criticized in Malthus's own time, the ideas in the Essay nonetheless gained traction among some 19th-century thinkers. Their influence even extended to the field of evolutionary biology, where English naturalist Charles Darwin adapted Malthus's concepts of population growth and resource scarcity to animal species. Advances in agricultural technology in the 20th century seemed to challenge Malthus's proposed limits on the growth of the food supply. Nonetheless, his Essay continues to exert a strong influence on modern thinking about such issues as overpopulation, food security, and the environment.

Malthus's Essay is a theoretical exploration of population growth and its relationship to wealth, poverty, happiness, and misery. The "principle of population" he describes is the tendency for unchecked population growth to rapidly outpace increases in food production. "Checks" to growth, such as war, disease, and starvation, are inevitable parts of the human condition, Malthus argues. If a society ever attained a state of peace and plenty, he contends, its population would grow until resources were stretched thin and poverty reemerged.

This study guide and infographic for Thomas Robert Malthus's An Essay on the Principle of Population offer summary and analysis on themes, symbols, and other literary devices found in the text. Explore Course Hero's library of literature materials, including documents and Q&A pairs.

Have study documents to share about An Essay on the Principle of Population? Upload them to earn free Course Hero access!