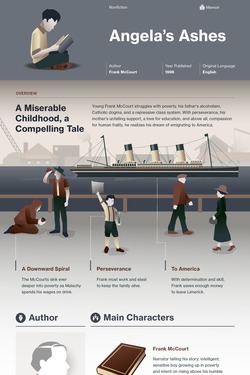 Frank McCourt is the author, first-person narrator, and main character of Angela's Ashes.

Angela's Ashes is written mostly in the present tense. Using the narrative past tense at the beginning to provide a context for his story, the author uses the present tense to create scenes of childhood and adolescence that seem to happen before the reader's eyes.

The title Angela's Ashes has several meanings. First, the ashes refer to those falling from the cigarettes Frank McCourt's mother, Angela McCourt, née Sheehan, smokes constantly. Second, the ashes refer to those smoldering in the fireplace, providing little warmth during the harsh Irish winters. Additionally, Frank McCourt himself clarifies the meaning: Angela's Ashes and 'Tis, his second memoir, were to be a single book, ending after his mother's death. The memoir, however, was split in two. 'Tis ends with his mother's ashes being scattered at a graveyard in Limerick, Ireland. Therefore, the ashes in the title refer primarily to his mother's remains.

This study guide and infographic for Frank McCourt's Angela's Ashes offer summary and analysis on themes, symbols, and other literary devices found in the text. Explore Course Hero's library of literature materials, including documents and Q&A pairs.

Poverty and Class Education and Literature Guilt and Forgiveness Alcoholism
Buy this book from Amazon.com
Infographic
Cite This Study Guide