In the world of Angels in America, AIDS represents untimely death. Prior is just 30 years old when he is diagnosed with AIDS. He tells Louis about his diagnosis at the funeral of Louis's grandmother—a woman who lived a long life, spanning much of the 20th century. Prior can no longer expect to be part of this orderly succession of the generations. "I'm going to die," he tells Louis. AIDS also represents a swift and sudden death. Roy gets his diagnosis in October and dies in January. Prior, too, is very sick when he is diagnosed. He already has lesions of Kaposi's sarcoma along with fevers, night sweats, and other symptoms. Together, his symptoms suggest he may not have much time left.

The Angel tells Prior humans are infected with "the Virus of TIME." All human mortality is thus represented through the metaphor of AIDS. In fact the Angel goes further and accuses humanity of being the patient zero of mortality; "In YOU the Virus of TIME began!" Thus AIDS is an intensification of the infection all humans carry in the form of death.

Tony Kushner's notes about staging Angels in America specify the Angel is "no joke;" she is powerful and terrible, awe-inspiring and strange. The intervention of the Angel in Prior's life means the struggles of homosexuals can be profound ones with far-reaching implications for all of humanity. The Angel symbolizes judgment and an opportunity to reclaim purity. Prior's encounter with the Angel enables him to come to grips with his illness. In Act I of Millennium Approaches, he says, "I'm going to die." But near the end of Perestroika, he says of his illness, "This is my life, from now on." It is partly thanks to the gravity and sublimity of the Angel that Prior's view of himself and his illness is transformed.

At one point, the Angel roars at Prior to "SUBMIT TO THE WILL OF HEAVEN!" However, the Heaven the Angel brings Prior to has been abandoned by God. The angels assembled there lack some key qualities of humans; they cannot imagine new things, and they are not mortal. They cannot change current events. They claim to know the future, but Prior refutes that; they can only guess what is to come. The weak and ailing Prior, in his prophet's garb and hospital gown, turns out to have more power than the Angel because he can imagine something new, a new way of living. In the Epilogue to Perestroika, the Angel is replaced by an iron statue of the angel Bethesda, who is associated with peace, love, and healing. Mute, beautiful, and powerless, she is the symbol of a millennium still to come.

Angels in America addresses a divide between the political left and right, or between Democrats and Republicans, as well as the symbolic divide between political corruption and political freedom. The Washington lawyer Martin Heller says of the Reagan era, "It's really the end of Liberalism. The end of New Deal Socialism." The Democrat/Republican division is intensified by the play's emphasis on Reagan's slowness in responding to the AIDS crisis as thousands died.

Louis and Joe represent this Democratic/Republican divide on a more personal level. Louis attempts to bridge the political divide in his relationship with Joe, who is a Republican, by finding the idea of a Republican lover exotic. Joe attempts to bridge the divide by pretending it doesn't exist; he tells Louis, "I can be anything for you." Both attempts fail, and the bitterest fight between Joe and Louis is the one over politics. Louis confronts Joe for writing clever legal decisions that trample on the rights of others, including homosexuals. Love cannot find a way for people so different to coexist; only politics can do that. As Louis says, "[O]nly in politics does the miraculous occur."

Roy and Louis represent opposing views about the essence of politics. For Roy politics is "enzymes" and "bowel movement" and "blood-red meat"; it is struggle to amass power and status in "the game of being alive." For Louis, politics is progress: "the world moving ahead." He also says, "Ultimately what defines us isn't race, but politics." And by "us," Louis means people in the United States. Louis believes in American exceptionalism, the theory that the United States is somehow uniquely democratic. Among all countries, Louis thinks the United States is uniquely multiracial, its citizens bound by politics rather than race or ethnicity. 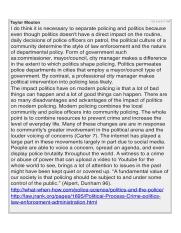 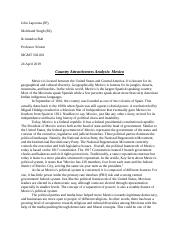 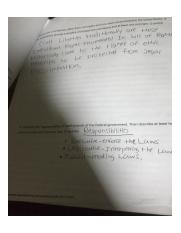 Have study documents to share about Angels in America? Upload them to earn free Course Hero access!