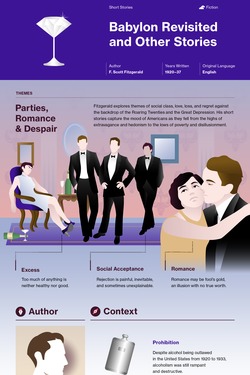 The collection of stories that make up Babylon Revisited and Other Stories largely serves as an exploration of the bridge between the excess of the 1920s and the desperation of the 1930s. F. Scott Fitzgerald seeks to illuminate the lack of responsibility that characterizes a lifestyle of partying and abuse and to pose questions about the changes, responsibilities, and atonement to follow. Critic John Higgins describes the title story as "one virtually flawless contribution to the canon of the short story."

In the short stories that make up Babylon Revisited and Other Stories, F. Scott Fitzgerald uses different points of view. He most often uses the third-person limited point of view, in which a tale is narrated primarily using a voice outside of the story while following only one character's perspective. This is the point of view in "The Ice Palace," "The Diamond as Big as the Ritz," "Winter Dreams," "Babylon Revisited," and "Crazy Sunday." In three stories Fitzgerald uses the third-person omniscient point of view, which allows an outside voice to know what all characters are thinking: "May Day," "Absolution," and "The Freshest Boy." Two stories are narrated in the first person, in which a character in the story tells the story from his point of view: "The Rich Boy" and "The Long Way Out."

All the stories in Babylon Revisited and Other Stories are written in the past tense.

Babylon Revisited and Other Stories takes its title from one of the stories in the collection. In this story Charlie Wales is a widower who has led a life of indulgence in Paris. He revisits the city in an effort to regain custody of his daughter, Honoria, now being cared for by his sister-in-law and her husband. In the Bible, Babylon suggests rebellion against God, material luxury, and immorality. For Americans living in Europe during the 1920s, Paris had a similar reputation.

This study guide and infographic for F. Scott Fitzgerald's Babylon Revisited: And Other Stories offer summary and analysis on themes, symbols, and other literary devices found in the text. Explore Course Hero's library of literature materials, including documents and Q&A pairs.

Have study documents to share about Babylon Revisited: And Other Stories? Upload them to earn free Course Hero access!