Beyond Good and Evil | Study Guide 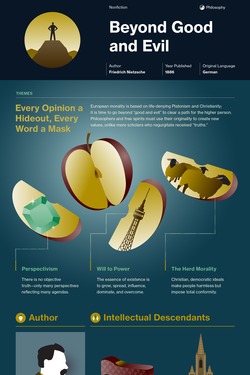 Friedrich Nietzsche's Beyond Good and Evil is an extended critique of Western European morality. In the author's view, philosophy has been tainted by Christian and Platonic (referring to the Greek philosopher Plato) ideas since the Roman Empire first embraced Christianity. In his view the hypocritical "slave morality" of Christian Europe imposes a limited perspective on society and is responsible for a new norm of mediocrity. Nietzsche believes that the new philosopher must push philosophy beyond the absolutes of good and evil to incorporate new thinking that supports the higher development of humanity. These free spirits will not only overcome useless paradigms but will also conquer their own weaknesses to pursue knowledge and uncover as many truths as they can bear. Most of the ideas in Beyond Good and Evil appear in other books by Nietzsche, such as Thus Spoke Zarathustra, but this text is perhaps the clearest, as well as the most systematic, presentation of his ideas.

The text Beyond Good and Evil is written in the third person, but the author sometimes refers to himself and sometimes to the reader. The author includes the reader as he speculates by using first-person plural we as in "we philosophers."

In Beyond Good and Evil: Prelude to a Philosophy of the Future, Nietzsche believes that the new philosopher of "tomorrow and the day after tomorrow" must lead philosophy away from traditional conceptions of morality and toward a more critical approach to thought by generating original ideas for the future that support the development of the higher man.

This study guide and infographic for Friedrich Wilhelm Nietzsche's Beyond Good and Evil offer summary and analysis on themes, symbols, and other literary devices found in the text. Explore Course Hero's library of literature materials, including documents and Q&A pairs.

Have study documents to share about Beyond Good and Evil? Upload them to earn free Course Hero access!