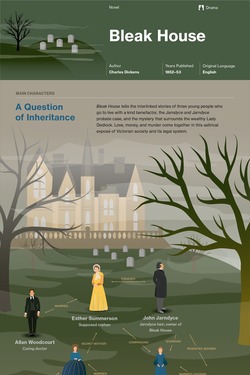 Parts of Bleak House are told in the third person by an omniscient narrator; other sections are told in the first person by the main character, Esther Summerson. She is the only first-person female narrator in all of Dickens's fiction.

Bleak House is named after the home of John Jarndyce, who takes in the orphans Richard Carstone and Ada Clare—two of the many heirs named in the Jarndyce and Jarndyce probate case—and hires Esther Summerson as Ada's companion. Despite its name, the large house is warm and inviting.

This study guide and infographic for Charles Dickens's Bleak House offer summary and analysis on themes, symbols, and other literary devices found in the text. Explore Course Hero's library of literature materials, including documents and Q&A pairs.