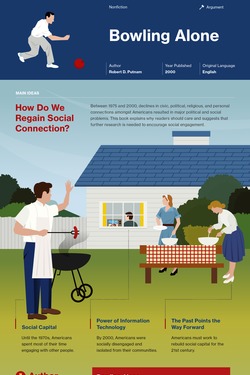 Robert Putnam wrote Bowling Alone after the extraordinary success of a 1995 article for a small academic journal called the Journal of Democracy. Suddenly, he was in the public eye—invited to speak to Americans on talk shows and even asked to meet with Bill Clinton, then the president of the United States. Realizing his ideas had hit a nerve, Putnam decided to write a full-length book on the subject. The book came out five years later, in 2000. While it has received mixed criticism and is somewhat dated, Bowling Alone has become an important cultural text. It has also given Putnam the opportunity to write more books on similar topics related to changes in American culture.

Bowling Alone is mainly written from the perspective of a third-person narrator, but it occasionally includes the author's first-person reflections or observations.

The title Bowling Alone refers to the author's argument that activities such as bowling, which were once communal, are now engaged in by solitary individuals. The subtitle, The Collapse and Revival of American Community, suggests Americans' loss of community will be reversed through creativity and energy.

This study guide and infographic for Robert Putnam's Bowling Alone: The Collapse and Revival of American Community offer summary and analysis on themes, symbols, and other literary devices found in the text. Explore Course Hero's library of literature materials, including documents and Q&A pairs.

Have study documents to share about Bowling Alone: The Collapse and Revival of American Community? Upload them to earn free Course Hero access!