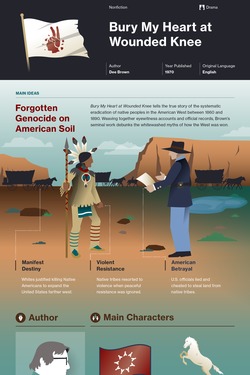 Bury My Heart at Wounded Knee is a factual narrative about the genocide of the American Indians between 1860 and 1890. Brown's extensive primary research gives voice to the Indians whose lives were threatened and ultimately exterminated by a land-hungry nation. Brown tells the story of how the American West was won in the words of those who lost everything they had.

Bury My Heart at Wounded Knee is a narrative nonfiction text about the American government's efforts to eradicate the American Indian population between 1860 and 1890. The events detailed in the book are told primarily by the author Brown in the guise of a third-person limited narrator, but Brown also includes excerpts from historical documents, many of which are first-person reports by American soldiers and the American Indians they persecuted.

The title phrase "bury my heart at Wounded Knee" originated in a 1927 poem by American writer Stephen Vincent Benét. "American Names" pays homage to the descriptive monikers of American cities and towns, including Wounded Knee, South Dakota. American troops slaughtered at least 150 unarmed Lakota Sioux Indians at Wounded Knee in December 1890, which is discussed at length in Chapter 19. Many historians believe the massacre at Wounded Knee symbolizes the eradication of American Indian life and culture by the U.S. government.

This study guide and infographic for Dee Alexander Brown's Bury My Heart at Wounded Knee offer summary and analysis on themes, symbols, and other literary devices found in the text. Explore Course Hero's library of literature materials, including documents and Q&A pairs.

Have study documents to share about Bury My Heart at Wounded Knee? Upload them to earn free Course Hero access!