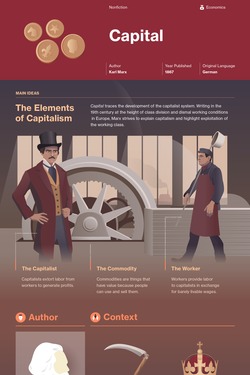 Capital was originally intended to be a multivolume in-depth examination of capitalism and economy. Only the first volume was finished in Marx's lifetime; the second two volumes were compiled from Marx's notes by German philosopher Friedrich Engels. Marx stated his purpose in writing the work was to "lay bare the economic law of motion of modern society." He was not referring to the law of motion in the sense of physical properties; rather, his purpose was to elaborate on the relationship between economics and human social behavior.

"Das Kapital" is German for capital, meaning wealth or assets. It is the same capital that is the root of the term capitalism, the focus of Marx's text. For Marx's purposes, capitalism also implies the social relationship between the wage laborer and the owner of capital. The subtitle of the work, "A Critique of Political Economy," indicates that the text is a critique (detailed evaluation) of the intellectual discipline of political economy, which in Marx's view has failed to account for the actual operations of capitalism.

This study guide and infographic for Karl Marx's Capital (Das Kapital) offer summary and analysis on themes, symbols, and other literary devices found in the text. Explore Course Hero's library of literature materials, including documents and Q&A pairs.