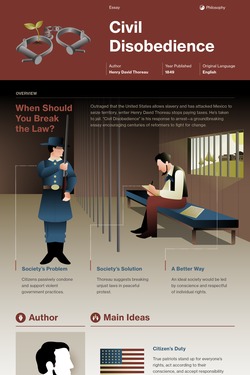 Civil disobedience, or the refusal to follow certain laws or government demands as a peaceful form of protest and a way of achieving a social goal, is a tactic used by individuals and reform movements around the world. Henry David Thoreau was one of the first to write a practical manual for civil disobedience, citing his own actions as an example. The essay, a personal response to the author's imprisonment for not paying a poll tax, urges concerned citizens to follow their consciences rather than the laws. In Thoreau's case, his conscience led him to oppose American slavery and the Mexican–American War. He specifically discusses the pitfalls of American democracy and offers guidelines for effective resistance to injustice, adaptable to any place and time. Many social reformers, including Indian independence leader Mohandas Gandhi and American civil rights activist Martin Luther King Jr., have cited "Civil Disobedience" as inspiration.

Henry David Thoreau's original title for this essay was "Resistance to Civil Government." The essay was first delivered as a lecture before it was published. After his death, the essay was reprinted as "On the Duty of Civil Disobedience" and later shortened to "Civil Disobedience," a phrase, never used in the essay itself, which means "the act of declining to follow certain laws or government demands as an act of protest." In "Civil Disobedience," Thoreau responds to a text by English clergyman William Paley, called "The Duty of Submission to Civil Government," which appears in The Principles of Moral and Political Philosophy (1785). Thoreau's second title may have been chosen to mirror the title of a different chapter in Paley's book: "On the Duty of Civil Obedience."

This study guide and infographic for Henry David Thoreau's Civil Disobedience offer summary and analysis on themes, symbols, and other literary devices found in the text. Explore Course Hero's library of literature materials, including documents and Q&A pairs.