Literature Study GuidesCivilization And Its Discontents

Civilization and Its Discontents | Study Guide 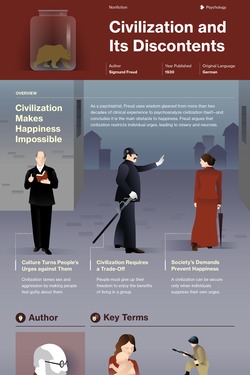 For more than two decades in the late 19th and early 20th centuries, Sigmund Freud witnessed a nonstop stream of human misery in his psychiatric office in Vienna, Austria. He treated a multitude of patients who were, in his opinion, suffering from the toxic side effects of civilization. This moved him to write Civilization and Its Discontents. Although Freud had no solutions to offer, he thought it essential to alert people to the tremendous psychological damage wrought by the repression of natural drives such as sexuality and aggression. With World War I (1914–18) behind him and World War II (1939–45) looming, Freud became convinced something had to change. He wondered specifically how people might benefit if civilization stopped insisting monogamous heterosexual marriage was the only permissible form of sexual expression.

In the 21st century cognitive-behavioral and medication management approaches have largely replaced psychoanalysis as the first-line treatment for most mental disorders. However, Freud's ideas about psychopathology and the human condition continue to be important components of psychotherapy.

In Civilization and Its Discontents, Sigmund Freud addresses readers in the first person and invites them into dialogue using the plural we.

Civilization and Its Discontents is a memorable title. But when discussing his book with its first English translator, Austrian-born author Sigmund Freud suggested a slightly different title: Man's Discomfort in Civilization. This title better conveys his contention people living in any culture must suppress their individual needs and wants and are thus doomed to unhappiness.

This study guide and infographic for Sigmund Freud's Civilization and Its Discontents offer summary and analysis on themes, symbols, and other literary devices found in the text. Explore Course Hero's library of literature materials, including documents and Q&A pairs.

Have study documents to share about Civilization and Its Discontents? Upload them to earn free Course Hero access!