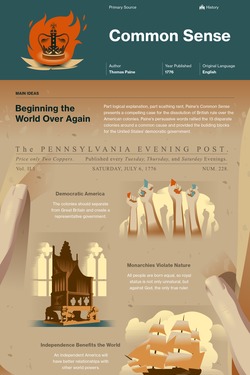 Thomas Paine wrote Common Sense to persuade colonial Americans of the value of independence from Great Britain. Before the pamphlet was published on January 10, 1776, few of the colonists—including prominent political leaders such as Thomas Jefferson, Samuel Adams, and George Washington—were even thinking about separating from England. Paine's initial 46-page text not only opened the door for conversations about independence but also laid the groundwork for the structure of the United States' representative form of government. As one of the defining documents of American history, Common Sense is a reminder of how and why the original 13 colonies gained their independence.

The title Common Sense refers to the logical reasoning Paine uses to explain why the American colonies should separate from Great Britain. He initially wanted to call his pamphlet Plain Truth, but he was persuaded by Dr. Benjamin Rush—a young, radical member of the Continental Congress and a dear friend—to take the name from the opening line of Part 3: In the following pages I offer nothing more than simple facts, plain arguments, and common sense.

This study guide and infographic for Thomas Paine's Common Sense offer summary and analysis on themes, symbols, and other literary devices found in the text. Explore Course Hero's library of literature materials, including documents and Q&A pairs.