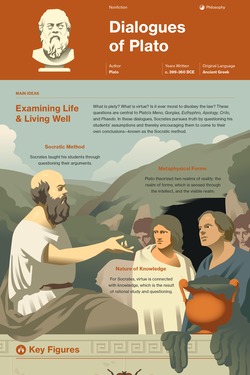 Plato wrote at least 30 dialogues. In fact, most of his philosophical output was in dialogue form. These dialogues almost invariably feature Greek philosopher Socrates as the main character with whom one or more interlocutors (dialogue partners) engage in conversation. The format of the conversation is question and answer. Typically, a question arises about the meaning of a particular concept, and the ensuing philosophical discussion centers around attempts to provide a complete answer.

The way Plato presents the dialogues also provides the reader with vivid accounts of Athenian society. Often the dialogues begin with a description of the setting where the discussion takes place—from a religious festival to a gymnasium. In addition, the dialogues feature historical characters. While there is debate among scholars over how accurately Plato portrays Socrates, it is generally agreed that both Socrates and many of his interlocutors were real historical figures. Plato's brothers, Glaucon and Adeimantus, for example, are featured in Plato's Republic (c. 360 BCE).

The Greek philosopher Plato wrote at least 30 dialogues, the form he used for most of his works. This study guide offers a selection of six famous dialogues. Each one presents the philosopher Socrates, Plato's teacher, in a conversation with a dialogue partner about the meaning of a concept.

This study guide and infographic for Plato's Dialogues of Plato offer summary and analysis on themes, symbols, and other literary devices found in the text. Explore Course Hero's library of literature materials, including documents and Q&A pairs.

Have study documents to share about Dialogues of Plato? Upload them to earn free Course Hero access!