Miguel Cervantes's Don Quixote is a masterpiece of Spanish literature and the pinnacle work of the Spanish Golden Age, a period of discovery, art, and prosperity during the 16th and 17th centuries.

Published in two parts—in 1605 and 1615—Don Quixote tells the story of the titular character and his squire, Sancho Panza. The novel's humor is derived from Quixote's over-the-top romanticism and preoccupation with medieval chivalry in contrast to Sancho Panza's dry and ironic wit. Upon publication the novel was met with acclaim and was instantly popular.

Today scholars and students alike are still fascinated by Cervantes's stories of the plains of La Mancha, the often insane antics of the story's protagonist, and his inexplicable obsession with his love interest Dulcinea.

1. Cervantes's experience as a slave inspired an adventure in Don Quixote.

In Part 1, Quixote frees a group of galley slaves—an act of heroism Cervantes would undoubtedly have welcomed during the four years he was enslaved in Algiers. Captured by Barbary pirates while sailing in 1575, Cervantes was not able to return to Spain until 1580 when his family could finally pay his ransom. 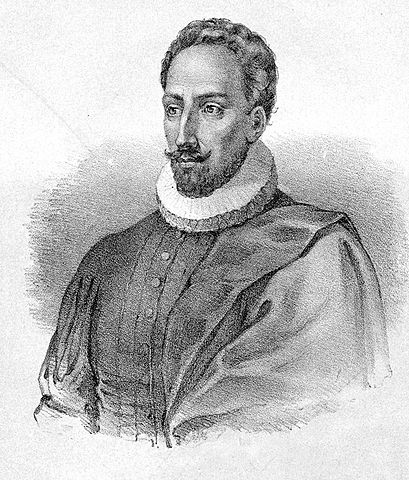 2. Statues of Don Quixote and Sancho Panza watch over a square in Madrid.

The statues are located in the Plaza de España, right in the center of Spain's capital city of Madrid. Behind the figures of Don Quixote on a horse and Sancho Panza on a donkey looms a stone monument depicting Cervantes himself. 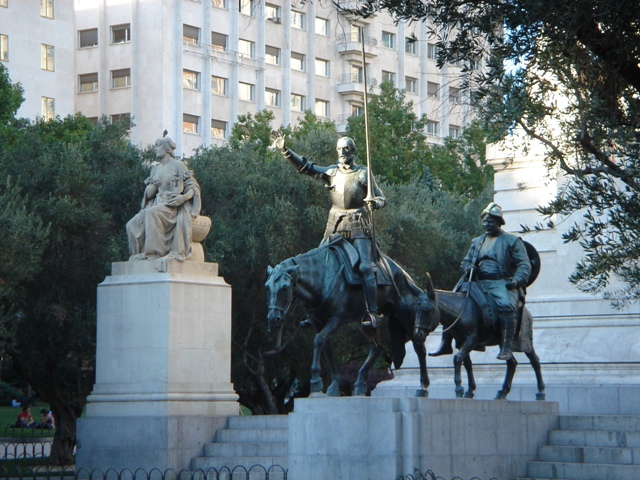 Sculptures of Don Quixote and Sancho Panza in Madrid

3. Scholars have extensively researched the exact setting of Don Quixote.

Cervantes left the setting of his novel intentionally vague, only noting it occurs on the Spanish plains of La Mancha. Many villages in Spain have claimed to be the location Cervantes alludes to near the beginning of his text and "[has] no desire to recall," but a group of Spanish scholars deduced that the most probable site is a town named Villanueva de los Infantes.

4. Most copies of the first edition of Don Quixote weren't sold in Cervantes's native Spain.

The first edition of Cervantes's Don Quixote was thought to have a print run of around 400 copies, at least 346 of which were shipped directly to Lima, Peru (still under Spanish rule at the time). Merchants often felt they would be able to turn a profit more easily with literature in the New World than in Spain.

5. A different author wrote a "false sequel" to Don Quixote.

Using a pseudonym, Alonso Fernández de Avellaneda wrote the unauthorized sequel shortly after the publication of the first part of Don Quixote. This version was criticized widely and dubbed "The False Quixote." When Cervantes published the real second part of the story, he alluded to the other author's version:

[G]entle...reader, how eagerly must thou be looking forward to this preface, expecting to find there retaliation, scolding, and abuse against the author of the second Don Quixote.

The Female Quixote was written by Charlotte Lennox in 1752 and features a female protagonist obsessed with antiquated ideals of romance and chivalry, much like Cervantes's character. The novel is notable for influencing the first book that Jane Austen completed for publication, Northanger Abbey.

The phrase "tilting at windmills" is used to describe fighting nonexistent or imaginary foes, often out of irrational paranoia. This idiom is an allusion to the famous scene in Don Quixote in which the title character engages in battle with a field of windmills he believes to be monstrous giants.

8. A Tony Award–winning Broadway musical is based on the life of Cervantes.

Man of La Mancha, written by Dale Wasserman, is a musical that features a "play within a play" of the tale of Don Quixote performed by Cervantes as he awaits trial during the Spanish Inquisition. Wasserman's production won five Tony Awards after its premiere in 1965, including Best Musical, and has been revived several times on Broadway.

9. Shakespeare wrote a play based on a Don Quixote character.

The play, titled Cardenio, is a tragicomedy set in rural Spain originally written for William Shakespeare's company The King's Men. While there are disagreements as to whether or not Shakespeare wrote Cardenio himself, he is one of the few playwrights of the time who wrote tragicomedies in pastoral settings. The play's setting and plot derive heavily from Don Quixote.

The popular Manga One Piece, later turned into an anime show, features a character named Donquixote Doflamingo. Although he is a criminally insane antagonist in the series, he shares the traits of flamboyant dress and dramatic mannerisms and phrasing with Cervantes's character.