Every book has a story—check out these 10 unusual facts about Dr. Jekyll and Mr. Hyde by Robert Louis Stevenson.

Published in 1886, Dr. Jekyll and Mr. Hyde is commonly read as a narrative of good versus evil, representing the battle between the opposing forces in everyone's psyche. The novel was hugely popular as it catered to the sentiments of the Victorian Era, an age preoccupied with moral virtue. Today the phrase Jekyll and Hyde has come to denote an individual whose personality or decisions change on a whim.

1. A dream gave Stevenson the idea for Dr. Jekyll and Mr. Hyde.

In 1885 Stevenson purportedly had a detailed dream that inspired him to write Dr. Jekyll and Mr. Hyde. His wife Fanny heard him cry out in his sleep and woke him up, but Stevenson expressed dismay and said he was dreaming "a fine bogey tale." Later, Stevenson wrote about the dream in his essay "A Chapter on Dreams."

I dreamed the scene at the window, and a scene afterward split in two, in which Hyde, pursued for some crime, took the powder and underwent the change in the presence of his pursuers.

2. According to legend, Stevenson burned a draft of Dr. Jekyll and Mr. Hyde.

When told by his wife he had "missed the allegory" in writing the novella, Stevenson apparently burned the draft and started fresh. It's not known whether this event really occurred or is simply part of the mystery surrounding the book's creation, which also includes reports Stevenson wrote in a fever for three days straight without stopping. Stevenson's stepson Lloyd was the first to present this account of the novella's composition, but scholars disagree as to whether he was a reliable source of information.

3. Stevenson was bedridden when he wrote Dr. Jekyll and Mr. Hyde.

During the 1880s Stevenson experienced a decline in health. Many believe this decline was due to undiagnosed tuberculosis, causing his lungs to malfunction. Since he was confined to his bed, he wrote many of his works during this time, including Dr. Jekyll and Mr. Hyde.

4. Dr. Jekyll's alter ego and secret life were inspired by a real criminal.

Stevenson's notion of a sophisticated gentleman living a secret criminal life was inspired by the story of Deacon William Brodie. Like Dr. Jekyll, Brodie enjoyed a high-society lifestyle. Instead of physically transforming like Dr. Jekyll, Brodie led a gang of burglars that terrorized his Edinburgh neighborhood at night. When his plot was finally discovered he attempted to survive his own execution by wearing a steel collar to his hanging. Although he bribed the guards to look the other way, his plan failed in the end.

5. Dr. Jekyll was named after a famous gardener.

Gertrude Jekyll was a renowned landscape designer who was responsible for the gardens of many of Britain's palaces, abbeys, and public parks. Her brother, Walter, was a friend of Stevenson, and he asked if he could use the family's surname for his character. They agreed, although they noted that their name was usually pronounced "Jeekyll."

Louis Vivet was one of the first recorded cases of split personality disorder, and the study of his condition was published shortly after Dr. Jekyll and Mr. Hyde. This has led many to believe Stevenson used him as a model for the novella in addition to Deacon William Brodie. Apparently Vivet's two recorded personalities were polar opposites, and while one was paralyzed from the waist down, the other could walk perfectly. Unlike the case of Deacon William Brodie, who chose to live a double life, Vivet's case was medically similar to the sudden transformation of Jekyll into Hyde.

7. Many critics consider Dr. Jekyll and Mr. Hyde to be an allegory of Scotland.

Although Dr. Jekyll and Mr. Hyde is set in England, many literary scholars believe it to be a social commentary on Scottish life in Edinburgh, the capital of Scotland. Scotland was seen as divided between two cultures, English and Scotch, and two tongues, English and Scots, one thought more refined and the other considered more spontaneous and barbaric.

Edinburgh also had two distinct districts: a clean and proper newer town to the north of railroad tracks, and a historically rough, foggy, and dangerous old town, the site of criminal activity. These two spheres of the city were reflected in the polarized personalities of Dr. Jekyll and Mr. Hyde who, despite their differences, still inhabited the same body.

8. An actor who played Dr. Jekyll and Mr. Hyde was accused of being Jack the Ripper.

An 1888 staged version of Dr. Jekyll and Mr. Hyde coincided so perfectly with the onset of the infamous Jack the Ripper murders in London that the public was convinced the actor Richard Mansfield must be the culprit. The truth of this accusation was never confirmed, but Mansfield's transformations during the play were so realistic and passionate that many audience members were genuinely horrified by the performance. 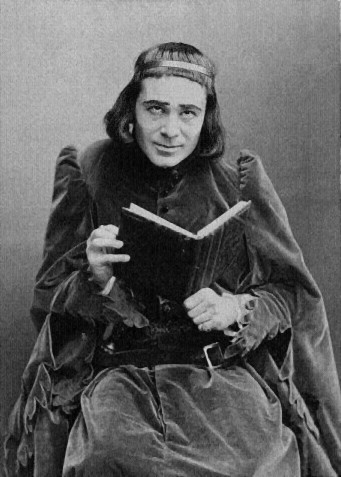 9. Robert Louis Stevenson was supposed to be a lighthouse engineer.

Stevenson's father was a lighthouse engineer, and he expected his son would follow in his footsteps. Stevenson did begin studying engineering but then switched to law. He ultimately abandoned those occupations to be a writer. Stevenson published his first book, An Inland Voyage, at 28 years old. Dr. Jekyll and Mr. Hyde, published when he was 35, helped propel him to fame.

10. Robert Louis Stevenson transferred his birthday to a 12-year-old.

In 1891, Stevenson was 41 years old and living in Samoa. He discovered that Anne Ide, the 12-year-old daughter of the U.S. Commissioner to Samoa, wished her birthday wasn't on Christmas Day. Stevenson, born on the 13th of November, drew up a document to officially transfer his birthday to Anne. In the document, he said, "I have now no further use for a birthday of any description."