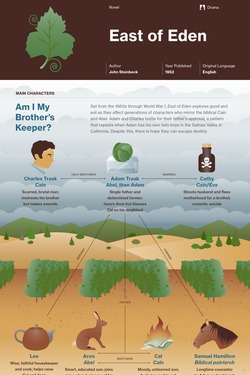 A single narrator—the grandson of the characters Samuel and Liza Hamilton—relates East of Eden, a fictional account, from the first-person point-of-view. The narrator rarely interjects as a character and has omniscient powers in relating the thoughts and feelings of all characters, so the novel gives the impression of a third-person point of view. It is generally believed that the narrator is the author, John Steinbeck.

East of Eden by John Steinbeck is told in the past tense.

East of Eden refers to the passage from the Bible: Genesis 4: 8–16. "Cain rose up against his brother Abel and slew him ... And Cain went away and dwelled in the land of Nod, on the east of Eden." The biblical tale of Cain and Abel forms the basis of Steinbeck's allegorical novel. The story explores the coexistence of love, jealousy, hatred, and personal responsibility between two brothers in two generations. The brothers metaphorically live east of Eden, even in the geographically western state of California, rather than in Eden.

This study guide and infographic for John Steinbeck's East of Eden offer summary and analysis on themes, symbols, and other literary devices found in the text. Explore Course Hero's library of literature materials, including documents and Q&A pairs.

Have study documents to share about East of Eden? Upload them to earn free Course Hero access!