Literature Study GuidesExistentialism Is A Humanism

Existentialism Is a Humanism | Study Guide 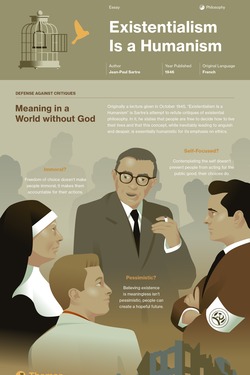 Sartre delivered "Existentialism Is a Humanism" as a public lecture in October 1945, a time when the world was just beginning to undertake the monumental task of rebuilding after World War II (1939–45). In retrospect Sartre's desire is clear: to clarify his philosophical position as part of a larger desire to clarify how Europe could move forward politically and socially after the devastation of a war fought on home soil. Sartre's main goal at the time, however, was to defend existentialism—the philosophical belief system that he himself popularized—from what he felt were false and misleading characterizations. On the one hand, the Marxists with whom Sartre shared many left-wing political ideas criticized existentialism for being indulgent and "bourgeois" because existentialism posits that people can only know what they personally experience, within their own subjective frames of reference. On the other hand, popular views of existentialism cast the philosophy as bleak and pessimistic because readers took the characters in Sartre's plays and his novel, Nausea (1938), at face value rather than seeing them as illustrations of what it is like to be trapped in the limited state of bad faith. Sartre uses "Existentialism Is a Humanism" to reiterate the main goals of existentialism as he defines it and to discuss some terms—such as abandonment, anguish, and despair—that were easily misunderstood by his contemporaries. Although Sartre came to regret publishing the essay and to repudiate some parts of it, his clear definitions of a difficult philosophical system make "Existentialism Is a Humanism" important for today's audience.

Written in shorthand by the author and scarcely edited after the fact, "Existentialism Is a Humanism" was originally a lecture Sartre delivered in Paris on October 29, 1945, at the invitation of Club Maintenant. For Sartre, existentialism suggests that the meaning of human existence is defined through experience rather than through religion or generalities. However, the title of the published essay captures the main purpose of the talk, to show that, rather than having an indulgent or pessimistic relationship with the world, existentialists take an optimistic view of human potential. Thus, the title subverts the popular view of existentialism as somehow antihumanist. Instead, existentialism is a humanism in its focus on the human experience as opposed to a relationship between humanity and the divine. Interestingly, for many years the translation of the title into English read "Existentialism and Humanism." This more abstract and general title overlooks the sense of controversy that is central to the essay, implying that Sartre is simply discussing two things, which may be connected in a number of ways.

This study guide and infographic for Jean-Paul Sartre's Existentialism Is a Humanism offer summary and analysis on themes, symbols, and other literary devices found in the text. Explore Course Hero's library of literature materials, including documents and Q&A pairs.

Have study documents to share about Existentialism Is a Humanism? Upload them to earn free Course Hero access!