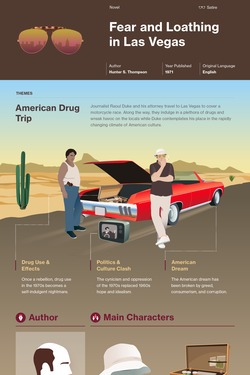 Fear and Loathing in Las Vegas features a first-person narrator. However, the narrator's altered state of consciousness—well documented in the text—makes the narration highly subjective.

Fear and Loathing in Las Vegas is written in the past tense.

The title Fear and Loathing in Las Vegas: A Savage Journey to the Heart of the American Dream refers two trips Thompson took with his friend Oscar Acosta to Las Vegas in 1971. Thompson uses the pseudonyms Raoul Duke and Dr. Gonzo for himself and his friend respectively, partly to protect them from legal action as he describes two weeks of excessive drug use, which leads to erratic public displays as well as to the defrauding of casinos and the destroying of expensive rental cars. Their law breaking and refusal to abide by any norms of polite society make Duke and Dr. Gonzo's time in Las Vegas a "savage journey." Duke is aware of the fear and loathing his and Dr. Gonzo's actions inspire in those around him, and those feelings are mutual. Duke expresses disgust for the consumption and violence underlying life in Las Vegas, which feeds his feelings of alienation and inspires him to create more mayhem.

This study guide and infographic for Hunter S. Thompson's Fear and Loathing in Las Vegas offer summary and analysis on themes, symbols, and other literary devices found in the text. Explore Course Hero's library of literature materials, including documents and Q&A pairs.

The American Dream Politics and Culture Clash Drug Use and Effects
Buy this book from Amazon.com
Infographic
Cite This Study Guide

Have study documents to share about Fear and Loathing in Las Vegas? Upload them to earn free Course Hero access!