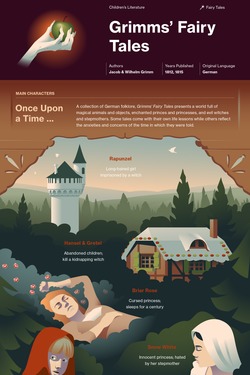 Toward the end of the 18th century two German brothers, Jacob and Wilhelm Grimm, became intensely interested in German folk literature. The fascination would continue for the rest of their lives. They worked to preserve what they called the "pure" voice of the German people, untainted by the trappings of modern society. Because their interest was in oral, not written, history, the brothers collected their stories by writing them down just as people narrated them. Their first published collection of fairy tales (1812 and 1815) was called Children's and Household Tales. Grimms' Fairy Tales, as the collection became known, contained 200 fairy tales, some of which had never been collected before and many of which became world famous. In all, seven volumes would be published, of which the last is considered authoritative. As the books appeared, they gradually shifted in focus. Volume 1 began as a scholarly work meant for adult historians, but as it became clear that the Grimms' most devoted readers were children, the tone of the stories became more appropriate for young readers. The collection is known in English as Grimms' Fairy Tales.

This study guide and infographic for Jacob and Wilhelm Grimm's Grimm's Fairy Tales (Selected) offer summary and analysis on themes, symbols, and other literary devices found in the text. Explore Course Hero's library of literature materials, including documents and Q&A pairs.