Half of a Yellow Sun | Study Guide 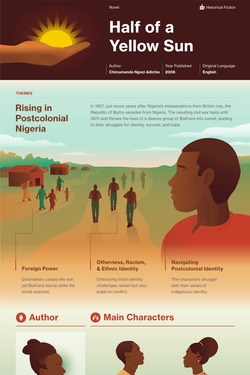 Half of a Yellow Sun is narrated in the third person omniscient, alternating between a focus on the internal and external experiences of three characters: Ugwu, Olanna, and Richard. Each of these characters has a different identity and a different struggle, allowing Chimamanda Ngozi Adichie to illuminate the various ways independence and the Biafran war affected different types of people.

Half of a Yellow Sun is written in the past tense.

The eastern region of Nigeria declared itself an independent republic, Biafra, in 1967. The war that followed pitted the underfunded, undertrained Biafran army against superior Nigerian forces backed by foreign militaries and resulted in widespread starvation throughout Biafra due to a military blockade. The Biafran flag features an image of half of a yellow sun set against three horizontal stripes—red, black, and green. For Biafrans, the sun was rising on the future of the young, hopeful nation. Biafra lost the war and failed as an independent state, so the symbol is ambiguous for modern readers, who may view it as a sun setting on a brief, failed hope. Throughout the novel the half of a yellow sun appears on the clothing and bodies of Biafrans. It symbolizes tenacity and hope for a future of self-determination against great odds.

This study guide and infographic for Chimamanda Ngozi Adichie's Half of a Yellow Sun offer summary and analysis on themes, symbols, and other literary devices found in the text. Explore Course Hero's library of literature materials, including documents and Q&A pairs.

Girl's Head in Calabash Half of a Yellow Sun Wooden Rifles

Have study documents to share about Half of a Yellow Sun? Upload them to earn free Course Hero access!