Prince Hamlet is a gentle, deep-thinking, loving, and loyal man. He is not only intelligent but also quick-witted, appreciative of his standing, and self-aware. He is a decent soul, well-liked by those close to him. As an only child, he is consumed with grief after the death of his father, King Hamlet. Audiences get as tangled in his thinking as he is, especially those who get stuck, as Polonius does, in wondering whether the prince is mad.

Polonius is counselor to the king and father to Laertes and Ophelia, although his children seem to have more heart and more integrity. That he loves his children is a strength, but it also seems that he might sacrifice their best interests for what is the most politically correct decision. And while Polonius is in a profession that may demand that type of submissiveness, one could argue that his tendency toward action without thought—a tendency that some audiences might say is in a proportion inverse to that of Hamlet's—is a contributing factor to both Ophelia's and his own demise.

Claudius is the king of Denmark. As the tale opens, Claudius has recently ascended to the throne, taking his deceased brother's (and Hamlet's father's) position; to the chagrin of many, he has also married his brother's widow, Gertrude. Claudius is a deceitful, corrupt, jealous, and controlling man—characteristics exhibited again and again throughout the play. Claudius carries himself well at the outset of the play; his nature is cordial and reserved as one might expect of well-bred royalty—but this feels forced, or "played." Little by little, we see Claudius's true nature: cold, calculating, and self-seeking, in contrast to Hamlet's gentle, introspective nature.

Loyal friend to Prince Hamlet, Horatio is also a student at Wittenberg in Germany. He is the person the sentries Barnardo and Francisco alert after they have twice seen a ghostly version of the recently deceased king. His role, which he performs well, is trusted ally and logical thinker. In a sense, it is the calm and collected Horatio who represents a halfway point between the introspective Hamlet and those who act without thinking, such as Fortinbras (the young prince of Norway), Polonius, and, at times, Claudius. Horatio, by virtue of having Hamlet's trust and company, is often privy to the prince's more private thoughts and plans. Through Horatio, Shakespeare often gives the audience insight into Hamlet, too. And, ultimately, because Horatio is so close to all that transpires—and yet not immediately involved—he is able to be a witness to the events in Denmark and, as Hamlet requested of him, communicate that tale to the world.

Adventurous yet obedient, Laertes, whose name comes from Homer's The Odyssey, is Polonius's son and Ophelia's brother. Early in the play, Laertes, who has most recently been living in France, comes across as a young man eager to begin his life. When introduced to the audience, he has come to the royal court, seeking permission from Claudius to return to France. He is a bit hesitant, maybe even tongue-tied in that setting. But in a scene shortly after this, with Ophelia in the family home, his character becomes a bit clearer. In that setting, Laertes is the gentle, loving, older brother. He shows his loyalty, affection, concern—and a bit of wisdom—when he speaks with his sister about Hamlet. Especially telling is Laertes's explanation to Ophelia that for persons of state, such as Hamlet, the good of the country often trumps individual desire—especially with regard to choice of partner.

The daughter of Polonius and sister of Laertes, Ophelia is also Hamlet's love interest. She is a young, bright, and gentle woman, comfortable even with those above her in rank, like Gertrude. Although the depth of her relationship with Hamlet is difficult to discern, she is undoubtedly devoted to him. Her unbridled devotion, along with her obvious inexperience in love—as well as Hamlet's determination to drive her away from him—all figure into her misery and, ultimately, her heartbreaking death.

Gertrude is queen to Claudius, the current king of Denmark, and the widow of his brother, the elder King Hamlet. She is also mother to Prince Hamlet, the main character in this tragedy. A central quality of Gertrude's character is that she loves her son; it is apparent from the outset and is a driving force for her.

The ghost is the spirit of Hamlet's father, who has recently died. The ghost tells Hamlet that his was not a natural death. He says he was murdered by Claudius, his brother, and he urges Hamlet to avenge his death by killing Claudius. The ghost's message unnerves Hamlet. He does not know whether to believe the ghost, or to think it some sort of demon there to trick him into committing murder. 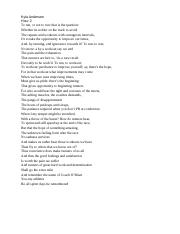 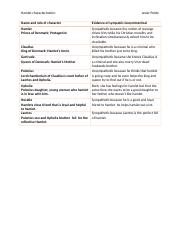 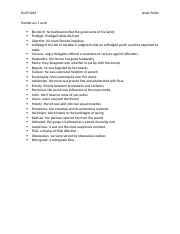 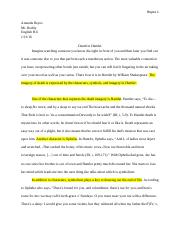 View all
Which of the following is an example of the fundamental attribution error? When Jeremiah scored 20 points in a basketball game, he said it was because he practiced hard that week; when he scored only
What is the summary and your reflection on the reading patients-in-waiting: living between sickness and health in the genomics era by timmermans and buchbinder?
Is Hamlet crazy or is he really just pretending? Does it even matter?
1. Explain why Denmark was making preparations for war. Who was initiating the challenge? What were they fighting over? Be sure to use the text to back up your answer and use proper grammar and spelli
Cite This Study Guide