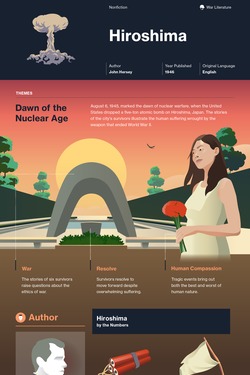 Hiroshima first appeared as a special report in the New Yorker in 1946. Published just a year after the bombing of Hiroshima, Japan, changed history, the gripping story of six survivors is, in the words of the Guardian, "filled with evidence of humanity at its worst and best."

Hiroshima is written from a third-person perspective.

The title Hiroshima is not just the name of a Japanese city, but an event of monumental historical significance, as well as a metaphor for the devastating potential of nuclear weapons. The world's first atom bomb was dropped on Hiroshima on August 6, 1945. The bomb flattened the city, killed a large percentage of the population, and left survivors with a lifetime of health problems due to radiation exposure.

This study guide and infographic for John Hersey's Hiroshima offer summary and analysis on themes, symbols, and other literary devices found in the text. Explore Course Hero's library of literature materials, including documents and Q&A pairs.