In Howards End, modern life is defined by property and progress in overdrive: a rush to acquire material goods accompanied by rapid technological and urban growth. This causes human beings to become disconnected from their inner lives, from each other, from nature, and from a shared sense of the past. In contrast, Margaret Schlegel, the novel's protagonist, favors the need to "only connect," to reconcile and balance different aspects of life through empathy and understanding. This includes forging a connection between what she calls the "seen" and the "unseen." The seen represents the practical, or outside, world, while the unseen represents the inner world, formed by the emotions, the intellect, and spiritual life. Reconnecting with England's rural past and the natural world are also essential components of healing the damage modern life has caused.

The Wilcox family values wealth, materialism, and power over emotion, intellect, and empathy. This is in stark contrast to the inner life the sisters value so highly, based on personal relationships and their enthusiasm for philosophy, current events, and the arts. Helen argues that the inner life is the real and more important one, but Margaret recognizes the value of both. She tells Helen that the inner life is like poetry, imaginative and passionate, while the outer life is like prose, more ordinary and functional communication. She claims Helen's romance with Paul is as much like poetry as her own love for Mr. Wilcox is like prose. She is aware of his faults, of his limitations, and his "furtive passions," yet she hopes to one day to help him "only connect the prose and passion ... and human love will have seen its heights."

The theme of rich versus poor, and the obligations of those with money to those without, surfaces over and over again in Howards End. The differences between three families, the Schlegels, the Wilcoxes, and the Basts, demonstrate how money defines three different kinds of lives.

The Schlegels and the Wilcoxes represent two different facets of the English upper class. The Schlegels were born with a certain level of privilege that allows them to live comfortably without working. They each draw a certain amount of money annually from investments. When asked if she is for riches or poverty, Margaret declares. "For riches. Money forever!" She recognizes that "riches" represent freedom, freedom for the Schlegels to do what they want with their time, such as exploring the world of art and culture or traveling. They don't have to worry about rent or where their next meal comes from. Being well-off does not mean Margaret is callous or devoid of compassion. She is an empathetic, thoughtful person who wants to help solve society's ills and who makes an effort to connect with others. However, she does not always fully recognize how extensive and definitive the gap between the rich and the poor really is.

The Wilcoxes, on the other hand, lack any empathy for the suffering of others. Mr. Wilcox is a self-made businessman. For him and his family, money equals status and power. Their multiple cars and homes broadcast their privilege, but also give them a sense of superiority to others less fortunate. They see other people as predators, plotting to take what they've got or otherwise undermine them, when in fact they are predators themselves: ruthless pragmatists, who assess every person or event to see how it betters or worsens their own circumstances. They are not above manipulating, qualifying their actions, or lying if it serves their best interests.

Although their money comes from different sources, it provides both families with what Margaret calls "a golden island," keeping them from the sea of poverty in which so many others struggle. The true cost of poverty to the human spirit is represented in the novel by Mr. Bast, a clerk with aspirations to better himself through music and literature. He leaves his job on the advice of Mr. Wilcox, who tells him, wrongly as it turns out, that the company for which Mr. Bast works will fail. This causes a humiliating descent into abject poverty. This poverty is a trap that that starves Mr. Bast's potential: he simply does not have the time or resources to educate himself, although it is what he wants most. Instead, he struggles to make ends meet and finally comes to believe that he is both beyond help and beyond hope. By the end of the novel, despite the efforts of the Schlegels to help him, Mr. Bast agrees that the divide between rich and poor is inescapable, and it ultimately destroys him.

The question of the responsibility of the rich to the poor is much debated in the novel. The Schlegel and Wilcox families hold opposing positions. The Schlegels see it as their duty to help Mr. Bast where they can, even if only by encouraging him and giving him advice. Helen tries to bail him and his wife Jacky out of financial trouble by buying back their belongings after an eviction, then offers them half of her own fortune. Margaret too is in favor of giving the poor a steady reliable income rather than small handouts, believing it would make them independent, much like herself, although on a smaller scale. Mr. Wilcox, on the other hand believes that the existence of rich and poor is inevitable, and therefore he has no responsibility to change things. He believes that "if wealth was divided up equally, in a few years there would be rich and poor again just the same." In his view, the economy is a meritocracy, and the poor deserve what they get. They are experiencing the reality that "the shoe is bound to pinch in places" as society progresses forward.

Feminism is at the heart of Howards End. Set against the backdrop of the suffrage movement, which was dedicated to fighting for women's rights during the Edwardian era, the novel shows in vivid detail how women struggled to establish their independence personally and politically. The novel was published in 1910 as women lobbied for the right to vote. Most mentions of the suffrage movement in the novel come in the form of men convincing women of its futility, and women acknowledging the strength of the arguments against it. Some women declare that they are glad they don't have the vote. One woman argues that clever women already influence their husbands' vote, which should be enough.

Forster offers an alternative, feminist view. He deliberately makes Margaret, his main character, the head of not only her family but eventually of a group of three families that she unites to live together at Howards End. She has raised her siblings after her parents' death and manages her own money. She has turned down marriage offers in favor of independence, and she enjoys intellectual pursuits and has liberal social views. Still, she must live among men who believe women to be inferior because they are at the mercy of their emotions, and therefore require protection.

Her marriage to the chauvinistic Mr. Wilcox is a study in how sexism represses women. Margaret learns to "play the girl," carefully editing what she says and does to help her husband maintain his sense of power and dominance. If she acts on her own behalf, she presents those actions as silly or flighty to keep the peace. Secretly, however, she chafes at her husband's need to control her. While he recognizes Margaret's worth to some extent, Mr. Wilcox also belittles her, denigrating her family's cultural interests, referring to her as the "little wife," and treating her as if she is too emotional to be trusted. Mr. Wilcox makes decisions for Margaret, selling a house she longed to live in without asking her. When Helen becomes pregnant out of wedlock, creating a potential scandal for the family, he steps in to control the situation without consulting either of the sisters. The last straw for Margaret is her husband's complete inability to empathize with Helen's situation. It is then that Margaret decides to tell him what she really thinks of him. and opting to do everything she can to help her sister.

Forster offers other examples in the novel of women asserting themselves and expressing their desire for change. Helen imagines a future in which women, like men, will face the assumption that they pursue an occupation. She travels freely, without a male chaperone, and has no plans to marry. Monica, Helen's Italian friend, even earns her own living as a journalist. Such ambitions may strike readers as basic human rights, but in light of the cultural expectations of women at the time, they were quite progressive. 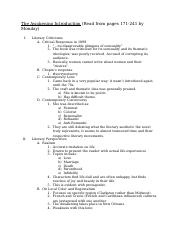 The Awakening Introduction and Literary Theory 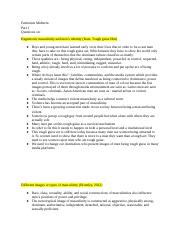 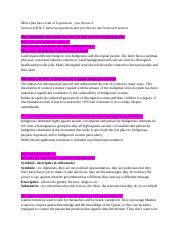