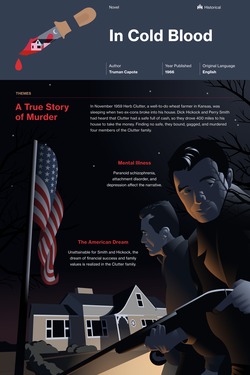 In Cold Blood is told in the third-person point of view by an omniscient narrator. Capote created what he termed the first "nonfiction novel" with this work.

In Cold Blood is told primarily in the past tense.

As Capote was writing In Cold Blood, he would periodically show small parts of the manuscript to Perry Smith and Dick Hickock, the accused murderers and primary characters, with whom he corresponded regularly. Smith didn't like the title because he felt the murders hadn't been committed in cold blood; that is, without emotion. Capote told Smith the title had a double meaning, but he wouldn't tell him what it was. Capote felt capital crimes should be tried in federal courts, and those found guilty should receive life sentences. At the time of Smith and Hickock's trial, however, many states, including Kansas, did not enforce such sentences. The book's title thus expressed not only the grisly murder of a family but also Capote's position on capital punishment.

This study guide and infographic for Truman Capote's In Cold Blood offer summary and analysis on themes, symbols, and other literary devices found in the text. Explore Course Hero's library of literature materials, including documents and Q&A pairs.

Have study documents to share about In Cold Blood? Upload them to earn free Course Hero access!