In Our Time | Study Guide 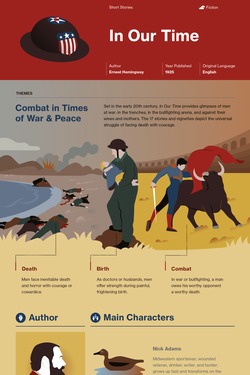 In Our Time was among Hemingway's first published books. Its short stories are interwoven with vignettes he calls chapters. Typically, a vignette is a short, evocative description. In Our Time's vignettes and stories feature Hemingway's stripped-down prose style to evoke scenes of war, displacement, and violent athleticism. In Our Time is also the book in which Hemingway's Nick Adams character debuts, featured in eight of these pieces. Hemingway went on to write more stories and sketches about Nick Adams; all 24 were collected and published as The Nick Adams Stories in 1972, after Hemingway's death. Nick is largely an autobiographical creation. Like Hemingway, Nick is the son of a doctor, and he is wounded during World War I. Unlike Hemingway, Nick serves in combat.

In Our Time is written in the past tense.

The title In Our Time is from the Anglican Church's Book of Common Prayer: "Give us peace in our time, O Lord." Many of the stories are set during World War I (1914–18) or the Greco-Turkish war of 1921–22. These wars occurred in Hemingway's time, and the book is a meditation on peace and war.

This study guide and infographic for Ernest Hemingway's In Our Time offer summary and analysis on themes, symbols, and other literary devices found in the text. Explore Course Hero's library of literature materials, including documents and Q&A pairs.

Have study documents to share about In Our Time? Upload them to earn free Course Hero access!