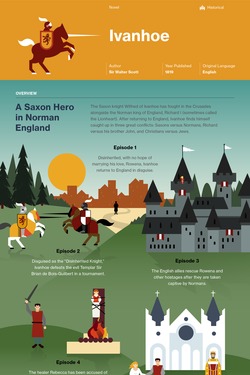 Ivanhoe is told in the third person by an omniscient narrator, who chooses when and how to reveal information for the purpose of building suspense.

Ivanhoe by Sir Walter Scott is written in the past tense.

Ivanhoe is named for its central character, the Saxon knight Wilfred of Ivanhoe. The name comes from a children's rhyme about English King Edward III (1312–77) and his son Edmund. As compensation for an offense done to Edmund by Lord de Hampden, Edward III received three lavish properties: Tring, Wing, and Ivanhoe.

This study guide and infographic for Sir Walter Scott's Ivanhoe offer summary and analysis on themes, symbols, and other literary devices found in the text. Explore Course Hero's library of literature materials, including documents and Q&A pairs.