Treated as an outcast by the Reeds, who take her in as an infant, Jane wants desperately to prove she is worthy of love and respect. She perseveres to become a star student, a well-liked teacher, and then governess to the young ward of Mr. Rochester. After agreeing to marry Mr. Rochester, an obstacle to the marriage presents a dilemma for Jane, which tests her deep-rooted morality.

Edward Rochester, 20 years older than Jane, falls in love with her and asks her to marry him, even though his first wife, Bertha, who is incurably insane, is secretly living at Thornfield. When he was a young man, Rochester's father and brother tricked him into marrying Bertha for their own financial gain. He is subject to dark, angry moods as he tries to cope with the fact that he is tied for life to a madwoman. Craving a relationship with someone he loves and respects, Rochester convinces himself that, because of Bertha's insanity, God will allow him to redeem himself by marrying Jane and living a good, moral life.

Adèle Varens is the daughter of a French dance-hall singer who was once Mr. Rochester's mistress. Although she is most likely not his daughter, Rochester has taken responsibility for the girl since her mother abandoned her. Her presence is a reminder of a part of Rochester's past for which he wishes to make reparations and is an indication of his sincere desire to put his dissolute past behind him and lead a more worthy life.

Bertha Mason, the Creole daughter of a wealthy Jamaican family, became Rochester's wife in an arranged marriage. When she descended into madness and violence, Rochester arranged to have her secretly cared for in a locked room on the third floor of Thornfield. Once a beautiful woman, she has taken on the appearance of a large, menacing beast, growling and bursting into maniacal laughter. She sometimes escapes her room late at night to carry out violent or destructive acts. Bertha represents the uncontrollable forces in life that test the characters' strength and resolve. Compared to a vampire and other mythic beasts, she adds to the novel's air of gothic mystery.

Mrs. Reed promised her husband, on his deathbed, to care for Jane as one of her own children. However, she despises Jane for being a poor dependent and treats Jane as an outcast in the household. She allows her own children to abuse and torment Jane. When Jane is 10 years old, Mrs. Reed sends her to a religious school for poor children. Eight years later, when she is dying, she contacts Jane to ease her conscience about a lie she told that affected Jane. However, she maintains her dislike of Jane to the end. Mrs. Reed is representative of that part of society that has a shallow fixation on wealth as the only measure of a person's value.

St. John (pronounced sin-jin) and his sisters, Mary and Diana, rescue Jane when she flees from Thornfield. He finds her a teaching position and later asks her to marry him and go with him to India to do missionary work. Deeply religious and conscientious, St. John is ambitious. Missionary work appeals to him because he wants more than an ordinary life. He has a strong personality, but he is somewhat severe and distant. His spirituality, unlike that of Helen Burns, lacks warmth and forgiveness.

Helen Burns, though only a few years older than Jane, becomes a kind of spiritual mentor to her. Helen is well-read, philosophical, and intensely spiritual. She teaches Jane to learn to temper her passions by keeping long-term goals in mind whenever she is tempted to give in to impulse. Helen's example helps Jane persevere and become successful at Lowood (after Helen's death). Although Jane does not completely understand Helen's spiritual beliefs, she is attracted to the feelings of hope and joy that she associates with her friend. 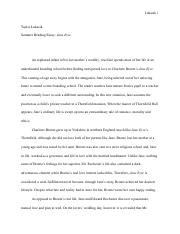 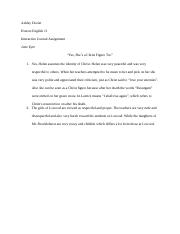 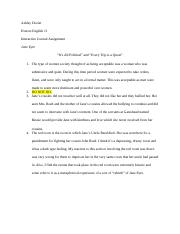 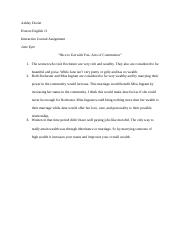