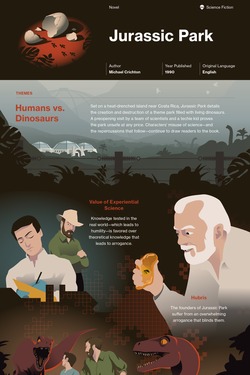 Jurassic Park is narrated from a third-person perspective with limited omniscience. The novel shifts points of view repeatedly, following many different characters.

Jurassic Park is written in the past tense.

This study guide and infographic for Michael Crichton's Jurassic Park offer summary and analysis on themes, symbols, and other literary devices found in the text. Explore Course Hero's library of literature materials, including documents and Q&A pairs.