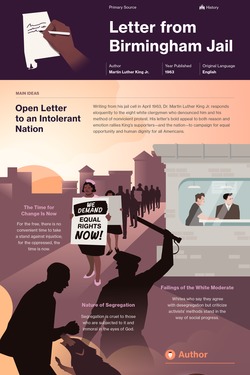 Dr. Martin Luther King Jr. wrote "Letter from Birmingham Jail" in April 1963. It was a public response to a letter penned by eight white Alabama religious leaders who denounced King's methods of nonviolent protest and his involvement in Birmingham's civil rights movement. King's persuasive yet patient rhetoric addresses each of their concerns in turn while exposing the deep-seated hurt and betrayal felt by many members of the black community.

Dr. Martin Luther King Jr. wrote "Letter from Birmingham Jail" while incarcerated in the Birmingham, Alabama, city jail following his arrest for violating an injunction against public protest within the city limits.

This study guide and infographic for Martin Luther King Jr.'s Letter from Birmingham Jail offer summary and analysis on themes, symbols, and other literary devices found in the text. Explore Course Hero's library of literature materials, including documents and Q&A pairs.

Have study documents to share about Letter from Birmingham Jail? Upload them to earn free Course Hero access!