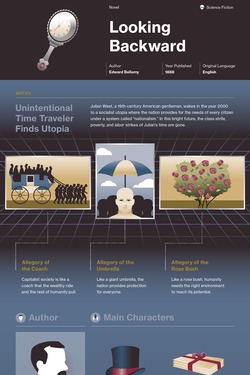 The author's preface is written from the perspective of an unnamed fictional person in the "Historical Section of Shawmut College in Boston" in the projected year 2000. The narrator of the novel that follows, starting in 1887 and leaping ahead over a century, is the character Julian West. The postscript is written from the perspective of the book's author, Edward Bellamy, living in the later years of the 19th century.

The full title, Looking Backward: 2000–1887, reflects the intent of the narrator to explain his past life in capitalist 19th-century America to his imagined 20th-century readers. He also explains the extraordinary circumstances that led him to go to sleep in 1887 and awaken over 100 years later into a world transformed into a socialist utopia.

This study guide and infographic for Edward Bellamy's Looking Backward offer summary and analysis on themes, symbols, and other literary devices found in the text. Explore Course Hero's library of literature materials, including documents and Q&A pairs.