Lord of the Flies | Chapter 2 : Fire on the Mountain | Summary

Upon returning, Ralph calls everyone together for a meeting using the conch. Ralph tells them that they are on an uninhabited island. Jack adds that an army is needed for hunting pigs, and Ralph agrees. Ralph establishes a rule that a boy can only speak if he has the conch.

Piggy takes the conch and states that no one knows they are on the island. Ralph says that they could be there a long time, adding, "Until the grownups come to fetch us we'll have fun."

A younger boy takes the conch but is unable to speak aloud, so he speaks through Piggy. He asks what they are going to do about the snake thing or beast. Ralph and the others try to reassure him that there is no such thing. As the boy insists, the older boys become anxious as well. Jack takes the conch and after agreeing with Ralph, he says, "If there was a snake we'd hunt it and kill it." Ralph is annoyed but eventually continues.

Ralph says they should make a fire on the mountain to help passing ships find them. The boys are excited by the suggestion and run up the mountain. Piggy, who initially stays back with Ralph, mocks their behavior. Eventually, Ralph goes too, and Piggy follows. Once the wood is gathered, the boys are at a loss as to how to light the fire. Jack realizes they can use Piggy's glasses to make fire and snatches them off his head.

After the fire goes out, Piggy says they could not keep such a fire going. He and Jack have an argument before Ralph steps in. He takes the conch and suggests they have certain special people care for the fire. Jack volunteers the choir to be responsible for the fire.

The fire begins to burn out of control. Piggy notes they need to be more careful and thoughtful about how they do things. His instructions get on Jack's nerves, and they squabble again. Piggy says they would have been wiser to build shelters first. He continues on with what he feels they should have done and criticizing their behavior. Piggy realizes that the boy who mentioned the beast is gone. No one knows what to say about the boy, though they realize he has most likely been burned up by the fire.

The thought of no adults on the island excites the boys at first. However, they do not see their situation as long term, or at least do not recognize the ramifications. Ralph's idea that they'll have fun until they are rescued sounds appealing. With this attitude it is no surprise that when they decide to put up the shelters, the boys will be of little help. Their immaturity leads them to view themselves on a fun adventure and unable to undertake tasks that must be done.

Because the boys are used to being in an ordered society—their private school—they are open to rules. They still have the idea of society instilled in them and therefore they respect the rule of talking only when one has the conch. However, the rules of society are not so well ingrained. When the idea of starting a signal fire is presented, they run off chaotically. The fire itself is not well prepared and ultimately burns out of control, adding their own scar to the Eden-like landscape they now inhabit. When it is discovered that a littlun has been killed because of the fire, the boys are ashamed and do not talk about it.

With the first mention of the beast, the possibility of fear emerges. Ralph tries to put down this fear by insisting there is no such thing as a beast. Yet, the littlun with the mulberry birthmark insists, and the others—even the older boys, despite their claims—seem uncertain. Jack acknowledges the growing fears and tries to defuse them when he says that the hunters will kill it if it does exist.

Jack's willingness to take on this responsibility puts him in a leadership position. In a time of fear people want someone to take care of them. While Ralph ultimately regains control of the meeting, Jack's assumption of authority foreshadows his rise to leadership. His strength and recognition of what the boys want allow him to gain control. Ralph tries to give the boys what he believes they need (similar to an adult), but this form of leadership is not appreciated on the island. The children want to do whatever they want to do.

During the meeting, Piggy suggests they make a signal fire, but his suggestion is not followed. Yet when Ralph makes the suggestion, the boys react enthusiastically. The lack of respect the boys have for Piggy renders him nearly useless. His intellect and ideas are not appreciated by the boys. However, they need Piggy. This occurs literally when it comes to the fire, as his glasses are used. But his ideas are never fully appreciated until later when Ralph has lost control. Instead, the boys respond to physicality. That is why Ralph was elected to be the leader and why Jack gains power. When he runs, people follow.

Piggy wants rules and abides by them religiously. Jack also claims to be interested in rules, yet his chief interest in rules—those he doesn't come up with—is as an opportunity to punish those that don't follow them. What Jack truly craves is power and control. 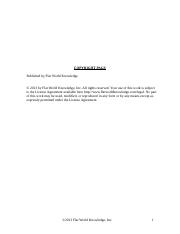 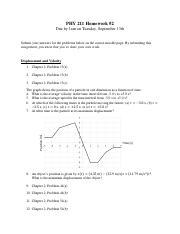 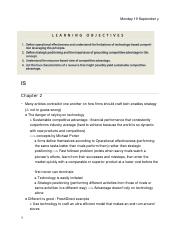 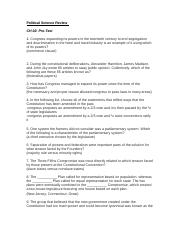 View all
You will choose one of the following topic areas. Review thegraphic organizer on page 407 in your textbook. The graphicorganizer that you create doesn't need to have boxed outlinesor arrows, but it sh
"But, at that instant, she beheld old Roger Chillingworth himself, standing in the remotest corner of the market-place, and smiling on her; a smile which—across the wide and bustling square, and throu
Communicating in the workplace provides us with opportunities to both listen and express ourselves effectively or ineffectively. As the video, “A Failure to Communicate,” located in the course shell a
question 1. Why is it important to narrow a topic early in the writing and research and process? What are some strategies you are using this week to narrow yours for the Week 7 paper? Question 2. Chap
Cite This Study Guide