The name Lysistrata means "disbander of armies," reflecting the goal of the play's heroine. Aristophanes offers stereotypical portrayals of young women in the play, but he portrays Lysistrata as serious-minded and determined. She is a cool-headed strategist and an articulate spokesperson not only for women but also for the populace as a whole. In her broad understanding of both domestic and political issues and her vision of a united Greece, she bears more than a passing resemblance to the goddess Athena, whose temple she temporarily occupies.

From the moment she arrives late to Lysistrata's meeting in the Prologos, Myrrhine comes off as unreliable (making a weak excuse for being late), reluctant to give up sex, and all too eager to drink wine. The oath-taking dialogue with Lysistrata is in some texts assigned to Myrrhine and in others to Calonice. Myrrhine also is featured in the scene that best illustrates the sex strike in action, ably working her husband, Cinesias, into a passion and then abandoning him. Aristophanes's audience may have interpreted Myrrhine's actions as typical of women's treachery. But she also represents women's desire to effect social change using the only tools available to most of them during that time—their bodies.

As one of the play's young men, Cinesias is costumed with an erect phallus when he comes looking for his wife at the Acropolis and begs her to come home. In the comic scene that ensues, he reveals his desperation not only for sex but for a return to normalcy, demonstrating the wisdom of Lysistrata's strategy. Cinesias is sometimes spelled Kinesias.

The Magistrate, who has come to the Acropolis to get money to buy material for the war, is characterized as a vitriolic, misogynistic, dirty old man who is no match for Lysistrata's skillful arguments.

These women give as good as they get from the Chorus of Old Men, who consistently berate and threaten them. As longtime attendants to the temple of Aphrodite, they enjoy higher social standing than the decrepit old men. They use urns of water as a defense against the Chorus of Old Men and their torches.

The Old Men, a group of retired soldiers, are the aggrieved voice of masculinity. They are enraged that women have taken over the treasury that pays their stipends, which they earn by serving on juries. Planning to smoke the women out, they approach the Acropolis with wood, coals, and torches—appropriate weapons given that fire is symbol of male power in the Greek tradition. 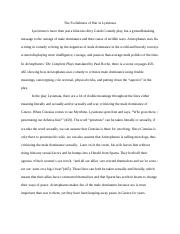