Macbeth is a Scottish nobleman who holds three successive titles in the play. Initially serving as Thane of Glamis, he meets three witches who prophesy he will be awarded the title of Thane of Cawdor and later become king of Scotland. When King Duncan makes him Thane of Cawdor as a reward for his role for putting down a rebellion, Macbeth decides the witches must be correct. He kills Duncan and takes the crown for himself. He then has his friend Banquo killed, as Banquo was the only other person to know the prophecy. When the other thanes become suspicious, they help Duncan's rightful heir raise an army and defeat Macbeth.

When Lady Macbeth hears of the witches' predictions, she helps her husband murder Duncan and take the throne. Abandoning the characteristics expected of a woman in her position (though she has no problem using them when it suits her purpose), she claims to feel no guilt about the murders that she and Macbeth have committed. She encourages Macbeth to let go of his guilt as well. However, it becomes clear that she still feels guilty, and the memory of Duncan's murder slowly drives her insane.

The sisters in this malevolent trio act as the catalyst for the play's action. The predictions they give Macbeth spark his thoughts of becoming king. They meet twice with Macbeth, and it becomes clear during a meeting with their goddess, Hecate, that they are not working in Macbeth's best interests, as they show him visions that are incomplete and lead to his demise.

Banquo is a friend and thane who fights alongside Macbeth in the battle to put down Macdonwald's rebellion. He is with Macbeth when the witches first appear, and they predict that Banquo will never be king but that his descendants will be. He also hears them predict Macbeth's rise to the throne. Later, this makes him suspicious of Macbeth's role in Duncan's murder, and Macbeth knows this. Based on this knowledge and the prediction about Banquo's descendants, Macbeth decides Banquo is a threat and has him killed.

Macduff is the Thane of Fife and a loyal follower of King Duncan. He has suspicions about Macbeth's role in Duncan's death, as seen in his refusal to attend Macbeth's coronation. Later, he tracks Duncan's son Malcolm to England and convinces him to return to Scotland to fight for his birthright and save the country. The cost of his loyalty, though, is his wife and child, whom Macbeth murders while Macduff is away. When Macduff encounters Macbeth on the battlefield, Macduff is the one to kill him.

Duncan is, by all accounts, a good, respectable king. He inspires loyalty in his thanes and rewards them for this, giving Macbeth a new title to honor his performance in battle. After he is murdered, the thanes and lords mourn him and avenge him by uniting against Macbeth.

Malcolm is King Duncan's older son. Fearing that he and his brother might also be killed—or accused of their father's murder—he flees to England. He has fears about returning to challenge Macbeth but overcomes them when Macduff convinces him how much his country needs him. With an army of 10,000 English soldiers and a thirst for revenge, he returns to Scotland to claim his rightful place as king. 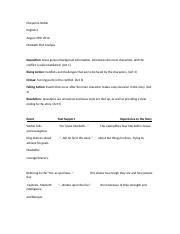 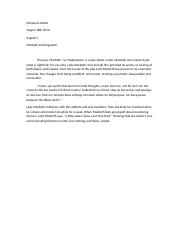 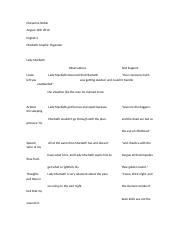 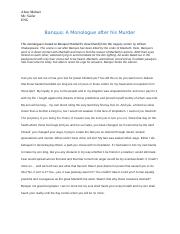