Gustave Flaubert's 1856 novel Madame Bovary tells the story of Emma Bovary, a woman whose boredom with middle-class life in France leads her to engage in extramarital affairs and spend money in an attempt to live beyond her means. The novel is notable for portraying a resilient female character, unsatisfied with her position as a housewife, long before feminist movements took hold in Europe.

The freedom Emma exhibits led to numerous controversies and made Flaubert notorious in France. Since its publication, many authors, critics, and readers have praised Flaubert's elegant writing style and the way in which he paints a sympathetic portrait of Emma despite her inherent sinfulness.

1. Madame Bovary may have been inspired by a real adulterous French housewife.

In the French town of Ry, a farmer's daughter named Delphine married Eugene Delamare, a medical practitioner of whom she quickly tired. Delphine was notorious in the town for having affairs with numerous other men and spending much of her husband's money on a lavish lifestyle. Flaubert denied the connection between Emma and Delphine, though many critics believe the similarities are too noticeable to overlook.

2. Flaubert was outraged when editors tried to cut parts of Madame Bovary.

Flaubert's publisher and close friend, Maxime Du Camp, suggested cutting parts of the novel he felt would be deemed indecent. Flaubert protested any such alterations, but the two eventually compromised and removed one scene of a carriage ride shared by Emma Bovary and her lover Léon Dupuis. 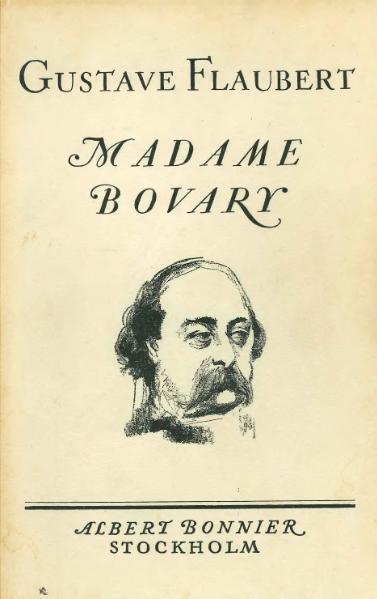 3. Flaubert was taken to court over Madame Bovary.

Considered indecent (as his publisher had feared), Madame Bovary was the cause for Flaubert's 1857 trial. The prosecution focused on the sinfulness of Emma's desire, stating, "This is the conclusion of the book ...by a man who has sought in this book for a person who could rule this woman. There is none there. The only person who ruled was Madame Bovary." Flaubert was acquitted, as the indecency of the text did not violate any specific law.

4. Flaubert described Emma Bovary as a reflection of himself.

Critics have noted that Emma's ideologies, particularly those related to the relationship between money and love, were also held by Flaubert. Flaubert himself spoke on the autobiographical element of the novel, praising his friend and French poet Charles Baudelaire for reading it and realizing "the profoundest truth of Madame Bovary, c'est moi!"

The 1970 film Ryan's Daughter follows the narrative of Madame Bovary, featuring a bored housewife who seeks excitement in life through adultery. In addition to the setting being changed to Ireland, the film's characters are members of the peasant class, as opposed to the bourgeoisie of Flaubert's novel. The film received poor reviews overall, which reportedly caused the director, David Lean, to go on a 14-year hiatus from filmmaking.

The actress's father, Vincente Minnelli, directed the 1949 film Madame Bovary. MGM Studios recycled a set used for an English village to appear as Flaubert's French town to save money but managed to do it so well that the film was nominated for an Oscar for set design.

The website BOVARY is a Greek-language domain featuring articles, editorials, and links related to women's health and beauty products. The website was inspired by Emma's love for lavish clothing and cosmetic products.

9. Henry James and Vladimir Nabokov were among the famous authors who praised Madame Bovary.

Flaubert's novel was always held in high esteem in literary circles. James wrote, "Madame Bovary has a perfection that not only stamps it, but that makes it stand almost alone." Nabokov praised it by writing, "Stylistically, it is prose doing what poetry is supposed to do."

10. King Louis-Philippe I of France has been considered a "Flaubertian character."

Madame Bovary was written during the reign of King Louis-Philippe (1830–48), who many historians agree embodied Flaubert's aesthetic. The king often walked the streets, dressed lavishly, carrying an umbrella, and mingling with the bourgeoisie of France.