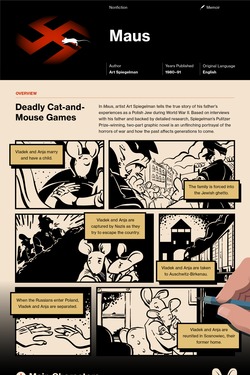 Maus tells two stories at the same time. The first is about author Art Spiegelman's relationship with his father, Vladek. Artie narrates those sections in the first person, conveying the conflicts associated with being the son of Holocaust survivors. The flashbacks to the past about Vladek's experiences during World War II are narrated in the first person by Vladek himself, conveying the anxiety and fear of his experiences.

Maus by Art Spiegelman is told in the past and present tenses.

Maus is the German word for "mouse." Author Art Spiegelman depicts the main characters in the book, almost all of whom are Jewish, as mice, alluding to the stereotyping of Jews as pests, being hunted and captured by cats, who represent the German Nazis. The subtitle, A Survivor's Tale, emphasizes the various ways in which characters survive the Holocaust throughout generations.

This study guide and infographic for Art Spiegelman's Maus offer summary and analysis on themes, symbols, and other literary devices found in the text. Explore Course Hero's library of literature materials, including documents and Q&A pairs.