Literature Study GuidesMeditations On First Philosophy With Objections And Replies

Meditations on First Philosophy (with Objections and Replies) | Study Guide 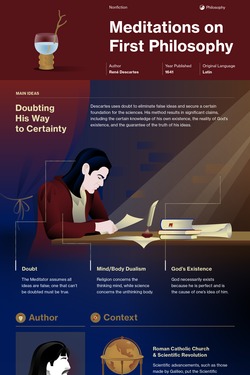 René Descartes wrote Meditations on First Philosophy partly to expand upon the substance of some arguments presented in his earlier Discourse on the Method of Rightly Conducting One's Reason and of Seeking for Truth in the Sciences (1637). That work, written for a general readership, sought to explain Descartes's method of determining metaphysical truths. The Meditations should not, however, be regarded as simply a more robust extension of the arguments in the Discourse written for a technical audience. Instead it has remained relevant since it was first published in 1641 because of its literary merit, along with its articulation of timeless questions about the existence and nature of the self, God, and the material world. Its contribution to the burgeoning scientific revolution make it an enduring classic of Western philosophy.

Meditations on First Philosophy is written in the first person, that of the Meditator.

The full title of the work is Meditations on First Philosophy: In Which the Existence of God and the Distinction of the Human Soul from the Body Are Demonstrated. Descartes's use of the word meditations suggests at least two related assumptions. One is that the process of knowing is internal. It is not a process whereby an external authority tells one what and how to think. The other is that meditating, as Descartes pursues it, is a rational process. The phrase first philosophy is synonymous with metaphysics or the study of the nature of reality. The subtitle reveals Descartes's two primary aims: to prove God's existence and to prove that the mind and body are distinct substances.

This study guide and infographic for René Descartes's Meditations on First Philosophy (with Objections and Replies) offer summary and analysis on themes, symbols, and other literary devices found in the text. Explore Course Hero's library of literature materials, including documents and Q&A pairs.

Have study documents to share about Meditations on First Philosophy (with Objections and Replies)? Upload them to earn free Course Hero access!