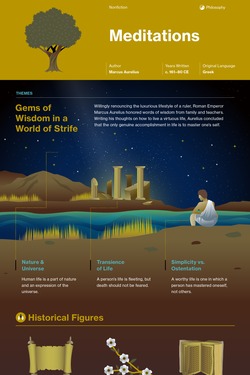 The Meditations of the Roman Emperor Marcus Aurelius (121–180 CE) were a series of discussions begun earlier in life with esteemed philosophers. The reign of Marcus Aurelius (161–180 CE) was fraught with continual conflict, both in Rome and across the outer reaches of the empire. The entries in The Meditations serve as a reminder of the morals of a Stoic, a believer in the ancient Greek philosophy that an individual must practice virtue and ignore such distractions as emotions and pain in order to be happy. They also show how Aurelius uniquely applied his values to the challenges he faced. He struggled as an individual to attain a balanced state between nature and fate, social and personal truth, and reason amid chaos.

The Meditations of Marcus Aurelius are told mainly in the first- and second-person by a Roman emperor musing over the best way to live one's life. At times he speaks directly in first person; at other times he addresses himself as "you."

Meditations originally did not have a title and was not intended for publication. A title was assigned to it in 364 CE as ta eis heauton (Greek for "to himself") by Roman philosopher Themistius in a manuscript now lost. The title reflects the nature of the text: personal reflections on the author's life.

This study guide and infographic for Marcus Aurelius's Meditations offer summary and analysis on themes, symbols, and other literary devices found in the text. Explore Course Hero's library of literature materials, including documents and Q&A pairs.

Bee and Fig Branch and Tree
Buy this book from Amazon.com
Infographic
Cite This Study Guide