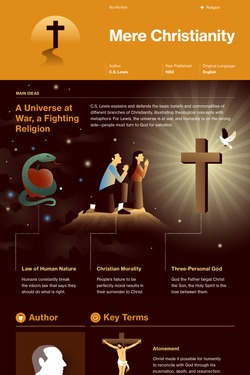 Mere Christianity is a work of Christian apologetics, a literary genre that is concerned with explaining and defending core aspects of Christian theology and practice. Lewis's intention was not to highlight the differences between the many Christian denominations (a few examples being Catholicism, Pentecostalism, the Baptists, and Lewis's own Anglican Church) nor to promote the specific beliefs of one denomination. Rather, he sought to present the basic ideas common to all sects in a casual, accessible, entertaining tone. He makes a case for this "mere Christianity" as the only right answer to the great existential questions facing mankind, such as the nature of the universe and the meaning of life. He builds his case for God's existence on a foundation of universal morality and then introduces Christianity as the belief system that most closely approximates the truth of existence. He uses reason rather than appeals to emotion to convince the reader to accept Christianity, illustrating complex points of theory and practice with elegantly simple and accessible metaphors.

C.S. Lewis describes and defends what he calls "mere Christianity," those core elements of Christianity that do not belong to any denomination but are found in all.

This study guide and infographic for C.S. Lewis's Mere Christianity offer summary and analysis on themes, symbols, and other literary devices found in the text. Explore Course Hero's library of literature materials, including documents and Q&A pairs.