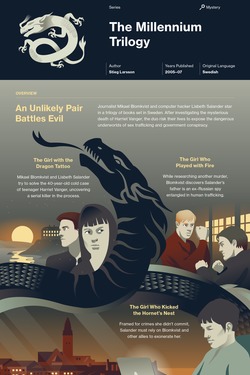 The Millennium trilogy follows journalist Mikael Blomkvist and ace computer hacker Lisbeth Salander in their fights for justice. Salander is a ward of the state, and she is sexually abused by her guardian. The pair first partner up in The Girl with the Dragon Tattoo on Hedeby Island, Sweden, to solve a 40-year-old cold case: the disappearance of millionaire Henrik Vanger's 16-year-old niece, Harriet Vanger. Blomkvist takes the job after stepping down from his editorship at Millennium magazine following an expensive libel case against him. Blomkvist makes strides with the case, but he soon realizes he needs a research assistant; he hires Salander, the hacker who compiled background information about Blomkvist for Vanger. Blomkvist and Salander's professional relationship becomes muddled by their on-and-off romance and Salander's seemingly strange, antisocial behavior; still, the two work together very well. Soon they uncover a serial killer who has been murdering women on Hedeby Island for 40 years. Salander cracks a cryptic note in Harriet Vanger's diary suggesting she knew the identity of the serial killer. He turns out to be Harriet's sexually abusive father, Gottfried Vanger. After Gottfried dies, Harriet's older brother, Martin Vanger, follows in his father's serial-killer footsteps. Blomkvist confronts Martin, who attacks and nearly kills him, but Salander arrives at the last moment and fights Vanger off, saving Blomkvist's life. They find Harriet living in Australia; it turns out she escaped Hedeby Island with her cousin's passport. Harriet is reunited with her uncle Henrik.

Books 2 and 3, The Girl Who Played with Fire and The Girl Who Kicked the Hornet's Nest, deal with the murders of Millennium freelance writers Dag Svensson and Mia Johansson after their research exposes the seedy underworld of human trafficking in Sweden. Although Blomkvist suspects the murderer is involved in this world—either as a trafficker or one of the men who paid for sex with the trafficked women—the crime-scene evidence suggests Salander is the killer. Blomkvist launches his own investigation to clear Salander's name and put the real killer behind bars. He learns the killer is Salander's father, a former Russian spy named Alexander Zalachenko. Salander makes the same connection and tracks down Zalachenko, who shoots her in the head and leaves her for dead. Salander survives the attack and spends her hospital recovery time planning to take down the corrupt Dr. Peter Teleborian, who institutionalized her when she was a child. After Salander proves her mental competence and shows how she was set up, the police drop the charges against her. During the trial, Salander, a lifelong loner, realizes how many friends she really has. Although she and Blomkvist had been estranged since their time on Hedeby Island, she welcomes him back into her life at the close of The Girl Who Kicked the Hornet's Nest.

The Millennium trilogy is narrated in third person from the perspective of an unnamed narrator with limited omniscience.

The Millennium trilogy is narrated in the past tense.

The Millennium trilogy gets its name from Millennium magazine, where investigative journalist Mikael Blomkvist works. While researching stories for the magazine, Blomkvist becomes embroiled in larger conflicts that unravel over the course of each novel in the series.

This study guide and infographic for Stieg Larsson's Millennium (Series) offer summary and analysis on themes, symbols, and other literary devices found in the text. Explore Course Hero's library of literature materials, including documents and Q&A pairs.