Literature Study GuidesNarrative Of The Life Of Frederick DouglassCharacter Analysis

Narrative of the Life of Frederick Douglass | Study Guide

Course Hero. (2016, July 28). Narrative of the Life of Frederick Douglass Study Guide. In Course Hero. Retrieved May 24, 2022, from https://www.coursehero.com/lit/Narrative-of-the-Life-of-Frederick-Douglass/

Narrative of the Life of Frederick Douglass | Character Analysis

Douglass is the narrator of the story, and he shares his life story, beginning with his first memories of enslavement. At the time of the writing of the book, Douglass is living as a free man in Massachusetts. The experiences Douglass discusses trace his growth from an uneducated child with few expectations to a man who has become a powerful speaker within the abolitionist movement. Douglass is intelligent, fierce, and proud. Once Douglass acquires the ability to read, he can no longer accept being a slave. Ultimately, he fights back against Edward Covey, a notorious slave breaker. Douglass says the event "was the turning-point in my career as a slave." It is only a matter a time until Douglass will attempt to free himself. Though his first attempt is foiled, he won't be denied.

Mr. Covey is a poor man who rents slaves for periods of time to work fields that he also rents. He has a reputation as a slave breaker (a person who specializes in destroying the wills of unruly slaves), and this is how he meets Douglass. Covey is a hard worker and is often out in the field with his slaves. He often sneaks up on them by slithering on his belly like a snake in order to see if they are working. Covey does this so that the slaves won't ever feel that they can rest. He feeds his slaves well but gives them a limited amount of time to eat. His cruel ways nearly break Douglass, who ultimately fights back. After their confrontation, Covey can no longer intimidate Douglass.

Sophia Auld, who lives in Baltimore, becomes the owner of Douglass when she and her husband bring him to their home when he is approximately eight years old. Upon first meeting Sophia Auld, Douglass sees "a white face beaming with the most kindly emotions." She is a decent woman who has never owned slaves. Sophia Auld teaches Douglass the alphabet and a few words before her husband forbids her to continue. After this, her behavior toward Douglass changes, and she becomes cruel.

Hugh Auld, husband of Sophia Auld, believes in the institution of slavery and forbids his wife from teaching Douglass how to read. Ironically, this event inspires Douglass to learn on his own. Douglass eventually leaves Hugh Auld but returns to him later on. At that point, Hugh Auld has Douglass learn a trade. The money Douglass earns is turned over to his master. When Douglass is beaten up at work, Hugh Auld tries to help, but the authorities do nothing to pursue the case.

Freeland rents Douglass temporarily. Douglass appreciates that Freeland is more decent and fair than his other masters. Freeland does not commit cruel acts and then hide behind religion. While a slave to Freeland, Douglass begins a Sabbath school and has nearly 40 slaves as pupils. Douglass forms strong bonds with some of them and plots to escape slavery with a few of them. Their plan is foiled, and Freeland's mother blames Douglass. 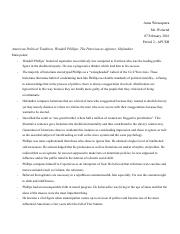 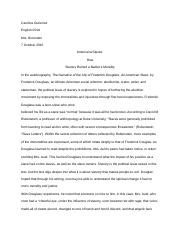 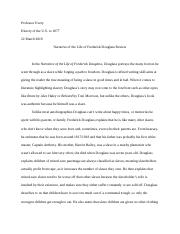 Review on the Narrative of the Life of Frederick Douglass (paper)

Have study documents to share about Narrative of the Life of Frederick Douglass? Upload them to earn free Course Hero access!