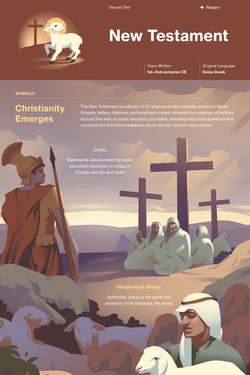 The New Testament is a collection of 27 books originally written in Koine or "common" Greek, the functional, nonliterary language of the day. These books were composed in the 1st and 2nd centuries CE by a number of authors and in a variety of genres (kinds or types of literary compositions). The New Testament is therefore a library of sources gathered together into what we call a canon, a set of texts considered authoritative by some religious group.

Catholic and Orthodox Christians also include additional books as part of the Old Testament canon; these so-called deuterocanonical texts were composed by Jews during the Hellenistic period (4th century BCE to 1st century CE) and are not part of the Hebrew Bible. The Hebrew Bible provides some of the historical background and theological foundation for the books of the New Testament, and many key themes, figures, and events from the Hebrew Bible appear and are transformed in the writings of the New Testament.

The collected texts of the New Testament reveal important questions and concerns that Christ-believers faced as they formed communities and wrote about their experiences. Many of these questions remain relevant for Christians today: how to live with other believers; how to interact with nonbelievers; how to think about the significance of Jesus's life and death; how to apply his teachings in community life; how to act as a member of the body politic; and how to conceptualize the relationships between God, Jesus, the Holy Spirit, human beings, and the natural world.

The New Testament continues to serve as a source for authoritative teaching, personal guidance, and Christian liturgy (public worship). It is also a rich source of inspiration for literature, art, film, and music up to the present day in a variety of cultures and religious traditions. Characters, themes, images, and even direct quotations from the New Testament pervade much of popular culture, and understanding the primary texts can provide insight into their later artistic use and interpretation. There is also a deeply regrettable tradition of using New Testament texts to support the persecution or vilification of Jews. At times, Christian interpreters have advanced a "supersessionist" reading of the New Testament, which holds that Christians effectively replaced Jews as God's chosen people. This Study Guide highlights the importance of avoiding such anti-Jewish or anti-Semitic interpretations.

In life, government, philosophy, and literature—especially in the Western world—the writings of the New Testament have exerted an extraordinary influence. People of all religious traditions, and those without professed religion, read and profit from these 27 books.

This guide follows the canonical order of the books of the New Testament: Gospels, Acts, Pauline Letters, Catholic Letters, and Revelation.

This study guide and infographic for Various's New Testament offer summary and analysis on themes, symbols, and other literary devices found in the text. Explore Course Hero's library of literature materials, including documents and Q&A pairs.