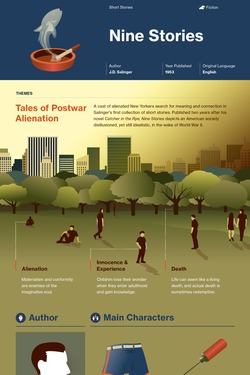 Nine Stories is Salinger's first short-story collection. It followed two years after the author's debut novel and critical success, Catcher in the Rye (1951), and contains Salinger's two best-known stories about war, "A Perfect Day for Bananafish" (1948) and "For Esmé—With Love and Squalor" (1950).

The other stories are "Uncle Wiggily in Connecticut" (1948), "Just Before the War with the Eskimos" (1948), "The Laughing Man" (1949), "Down at the Dinghy" (1949), "Pretty Mouth and Green My Eyes" (1951), "De Daumier-Smith's Blue Period" (1952), and "Teddy" (1953). Salinger did not specifically write the stories to be published together; nonetheless, they are closely bound by themes of postwar disillusionment and coming-of-age discovery. The characters are privileged upper-middle-class Americans who live in Manhattan and its commuter suburbs.

J.D. Salinger uses shifting narrative perspectives in Nine Stories to elucidate how human beings disguise themselves in the narratives they make up about their own lives.

Some stories have third-person narrators, including:

Others have first-person narrators:

All nine stories in the collection Nine Stories are written in the past tense.

Nine Stories is the American title for the short-story collection. Outside the United States, the same collection was titled For Esmé—With Love and Squalor, and Other Stories.

This study guide and infographic for J.D. Salinger's Nine Stories offer summary and analysis on themes, symbols, and other literary devices found in the text. Explore Course Hero's library of literature materials, including documents and Q&A pairs.